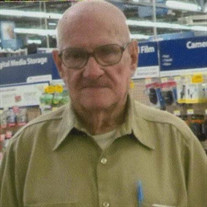 William Quentin “Gene” Scroggins, 93, of Louisiana, MO passed away on September 8, 2019. “Our buddy has made his last three-point landing!”. Graveside services with military honors will be held at 3:30 P.M. on Wednesday, September 11, 2019 at the Riverview Cemetery in Louisiana, MO. The Rev. Mark Burke will officiate. He will be buried next to his wife, Virginia, at the Riverview Cemetery. Gene was born on November 15, 1925 in Monett, MO to William C. “Bill” and Laura Mae Henson Scroggins. He was married to Virginia Lee Stinson on December 24, 1950 and she preceded him in death on October 1, 2002. They had no children, but raised Gennie’s youngest sister Ruth Ann from age 8 until her graduation and did have several pets. He is survived by a sister in-law, Fern Adams, 2 nieces, Gwen Miller and Jane Thorpe, several great nieces and nephews, and very special friends, “We Love You”, Chris Hausmann and Vance Anderson. He was preceded in death by his parents, Bill and Laura Scroggins, his wife, Virginia of 52 years, 4 sisters, Lucille “Cele”, Rosa, Juanita “Nita”, and Delores “Dee”, and 2 sisters in-law, Gladys and Ruth Ann. Gene registered for the draft in 1943 and did not pass due to health reasons. He later was drafted in 1954 serving in the US Army stationed in Germany as a mechanic and was honorably discharged in 1956 at Fort Bragg. Upon returning to Louisiana, he finished building his home and his airplane hangar. Gene was a pilot and loved to fly his plane. Flying was his passion. He worked for several car agencies, construction jobs, railroad, and contractors, and Louisiana Manufacturing as a machinist retiring in 1990 after 24 years of work. He was baptized at the Grassy Creek Baptist Church on June 12, 2005. His favorite saying was “Thank you a blue million, Auf Wiedersehen”. Collier Funeral Home, Louisiana, MO was in charge of arrangements.

The family of William "Gene" Scroggins created this Life Tributes page to make it easy to share your memories.

Send flowers to the Scroggins family.