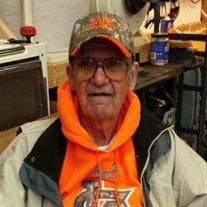 William "Bill" Mathew Boston Sr, age 84, of Louisiana, MO, passed away on Saturday, December 8, 2018 at 1:55 PM at St Luke's Hospital in Chesterfield, MO. Bill was born on August 14, 1934, at his home in Mt Olive, IL to Mat and Edna Martin Boston. He married Shirley Ann Robeza on December 31, 1955. To this marriage they had three children, Kim Boston of Louisiana, MO, Renee (Boston) Parsons of Sealy, TX, and William "Billy" Boston, Jr of Louisiana, MO. Bill and Shirley moved to Louisiana in 1956 to manage the redi-mixed concrete plant. Bill worked for the plant for 51 years before retiring, due to some health issues. Bill was a lifelong member of the Elks Lodge #791 and enjoyed visiting the Trimble House to see his friends. One passion in his life, was hunting with his son and grandsons. He also enjoyed sitting around the campfire and visiting friends, watching football games, and watching his favorite baseball team, the St. Louis Cardinals. Bill was preceded in death by his wife, Shirley, in 2004, his father, mother, an infant brother, nephew and three brother in-laws He is survived by his children, Kim Boston, and Billy (Julie) Boston all of Louisiana, MO, and Renee (Dale) Parsons, of Sealy, TX. He is also survived by his grandchildren Danielle (Judd) Anderson of Kansas City, MO, Rob (Heather) Parsons of Louisiana, MO, Erin (Matt) Casassa of Cypress, TX, Jessica (David) Knesek, of Sealy, Tx, Joshua (Kristi) Boston of Wentzville, MO, Jacob (Hannah Franke) Boston of St Peters, MO, and Annie (Cary) Gray of St Peters, MO. He also had 16 great-grandchildren of which he adored. Also surviving are his sister and brothers: Mary Jane Florek and James (Peggy) Boston of Mt Olive, IL, and Denis (Martha) Boston of Maryville, IL, and a sister-in-law, Betty Dragovich of Staunton, IL, and many nieces and nephews. A Memorial Service was held on Wednesday, December 12th from 11:00 A.M. to 1:00 P.M. at the Elks Lodge #791 in Louisiana. Bill will be sadly missed by his family, friends and "Trimble House friends". Memorials can be made to the "Trimble House Fund" or donor's choice. Collier Funeral Home, Louisiana, MO was in charge of arrangements.

The family of William "Bill" Matthew Boston Sr. created this Life Tributes page to make it easy to share your memories.

Send flowers to the Boston family.