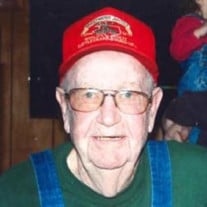 Mr. Wesley E. “Buck” Elliott, 87, of Louisiana, MO, passed away on Thursday, December 3, 2020 at the Hannibal Regional Hospital in Hannibal, MO. Graveside Services will be held at 1:30 P.M. on Monday, December 7, 2020 at the Fairview Cemetery near Louisiana, MO. The Rev. Alvin Young will officiate. Visitation will be from 12:00 P.M. until 1:00 P.M. Monday, Dec. 7th at the Collier Funeral Home in Louisiana, MO. A Celebration of Life service will also be held at a later date. Buck was born on May 2, 1933 in Pike County, MO to James “Wes” Elliott and Leona Hudson Elliott. He was married to Mary Jane Corum on June 24, 1955 in Louisiana, MO. She preceded him in death on September 8, 2015. He is survived by 4 sons, Wesley C. Elliott (Barb) of Louisiana, MO, Charles R. Elliott (Delores) of Louisiana, MO, Joseph A. Elliott (Tammie) of Louisiana, MO, and Robert E. Elliott, 10 grandchildren, 9 great grandchildren, 2 brothers, Steve Elliott (Mary Ann) of Wever, IA, and Monroe Elliott (Sylvia) of Louisiana, MO, a sister in-law, Ruby Ward of Bowling Green, MO, and numerous nieces and nephews. He was preceded in death by his parents, his wife, 4 brothers, Jim Elliott, Ray Elliott, Porter Elliott, and Clyde Elliott, and a great granddaughter, Gracie Elliott. Growing up in Pike County, Buck went to work at an early age farming. He later became a truck driver doing that until his retirement in 1988. He loved driving a truck. Starting with Rodger’s Cartage Co., he soon operated and owned his own truck. He was a member of the Teamsters. He was Baptist by Faith. He enjoyed hunting, fishing, and rattlesnake hunting in Texas with his brothers. After his wife passed away, Buck lived with his dog Molly and his youngest grandson, Andy, and enjoyed spending time with them and other family. Honorary pallbearers will be Monroe Elliott, Steve Elliott, David Elliott, Trevor Roed, Max Roed, Brayden Simmons, Ted Stulhman, John Sisson, and Steve Sisson. Active pallbearers will be Scott Elliott, Chris Newlind, Andy Elliott, Alex Elliott, Joey Simmons, and Byron Guertzen. Memorials May be made to the Fairview Cemetery or Donor’s choice in care of the funeral home.

The family of Wesley E. "Buck" Elliott created this Life Tributes page to make it easy to share your memories.

Send flowers to the Elliott family.