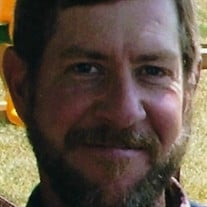 Mr. Walter Theodore “Ted” Waddell, 57, of rural Louisiana, Missouri passed away Monday, November 27, 2017 at his home surrounded by his family. A Celebration of Life service will be held at 10:00 a.m. Saturday, December 9, 2017 at the Grassy Creek Baptist Church with Rev. Brook Kurth officiating. Visitation will be held from 4 to 8 p.m. Friday December 8, 2017 at the Collier Funeral Home in Louisiana, Missouri. Ted was born August 10, 1960 in Louisiana, Missouri to James Briscoe Waddell, Jr. and Lois Elinor Gabbert Waddell. He married Rowena Gail Winner November 25, 1989 at Hydesburg United Methodist Church in Hannibal, Missouri. He is survived by his wife, Rowena Waddell of the home, One son; James Cade Waddell, one daughter, Leah Dale Waddell, his mother, Lois Elinor Waddell, one sister; Lois Diane Boyd all of Louisiana, Missouri, one brother, James Briscoe Waddell III of Hannibal, Missouri and numerous nieces and nephews. He was preceded in death by his father, James Briscoe Waddell, Jr March 3, 2016. He graduated from the Louisiana High School with the Class of 1978. Ted had been a farmer in the Grassy Creek area all of his life. He had also worked in construction. He was a member and Deacon of the Grassy Creek Baptist Church. Memorials may be given to Community Loving Care Hospice or to the Siteman Cancer Center for Melanoma Cancer Research in care of Collier Funeral Homes, Inc., 117 Barnard Drive, Louisiana, Missouri 63353

The family of Walter "Ted" Theodore Waddell created this Life Tributes page to make it easy to share your memories.

Send flowers to the Waddell family.