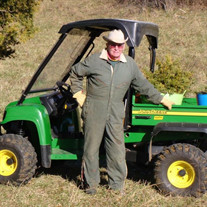 Walter G. Allen, DVM, well known as Boe or Doc, died on February 5, 2017 at his home in Louisiana, MO. Dr. Allen practiced veterinary medicine in Pike County, MO and Pike County, IL for 39 years. He was the son of Dr. and Mrs. Hollis Allen of Webster Groves and had 2 brothers, Dr. James H. Allen who was head of the Pike County Memorial Hospital Laboratory Department for a number of years, and Dr. Louis A. Allen of Kansas City. His father, the founder of Allen Medical Laboratories in St. Louis, and both brothers were pathologists. “Boe” Allen graduated from Webster Groves High School in 1945. He enlisted in the US Navy after graduation and was stationed in Texas. In 1950 he graduated from the University of Missouri with a Bachelor of Science Degree in agriculture, accepting a job with the Independent Meat Packing Co. in St. Louis. On July 29, 1951 he was married to Betty Jane Conrad, a graduate of Louisiana High School in 1946 and Missouri University School of Journalism in 1950. Dr. Allen was accepted by the College of Veterinary Medicine at Missouri University in 1953 and graduated with a Doctor of Veterinary Medicine Degree in 1957. He joined Dr. J. D. Williamson in Clarksville, and the Williamson and Allen Veterinary Clinic was established. When Dr. Williamson retired, Dr. Allen continued working until 1996, having served the Twin Pike area for 39 years. Boe and his 2 brothers were inducted into the Third Annual Webster Groves High School Sports Hall of Fame, the first family of athletes to be so honored. Boe held 7 athletic letters in football and wrestling and was the undefeated state wrestling champion in 1945 as well as being wrestling captain that year. He was on the Missouri University Livestock Judging Team both his junior and senior years. His love of horses is well known and he owned many. In addition to his wife, he is survived by two sons, John H. Allen of Columbia, MO, and special friend Janet Guthrie, and Stephen W. Allen and wife Carolyn of rural Louisiana, brother in-law, Bob Conrad and wife Annette of Eolia, MO, sister in-law, Martha Allen, cherished Nieces and Nephews, and many great friends. A Memorial service will be held at 12:00 P.M. on Saturday, February 11, 2017 at the Collier Funeral Home in Louisiana, MO. Visitation will be held from 10:00 A.M. until time of service at the funeral home. As per his wishes, he chose to be cremated. Private interment will be in the Greenwood Cemetery at a later date. Memorials may be given to the Friends of the Louisiana Library, Pike Pioneers Nutrition Center, or the Louisiana Alumni & Friends Association in care of Collier Funeral Homes, Inc., 117 Barnard Drive, Louisiana, MO 63353.

The family of Dr. Walter "Boe" G. Allen created this Life Tributes page to make it easy to share your memories.

Send flowers to the Allen family.