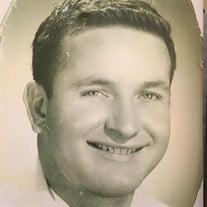 W. Joe Martin, MD passed away peacefully at home on April 28, 2020. He was born on December 20, 1927 in Poplar Bluff, MO to Lilian Shadle Martin and Bert August Martin. Joe graduated high school in 1945 from Fredericktown, MO. Before graduating he entered Westminster College in Fulton, MO. After 18 months he joined the Navy for two years. Dr. Joe returned to graduate from Westminster in 1950 and St. Louis University School of Medicine in 1954. On June 7, 1952 Joe married the true love of his life, Janet Rae Swacker in St. Louis. After completing a surgical residency at City Hospital in St. Louis, they moved to Louisiana in 1956 joining Dr. John Middleton in a partnership that would last over 30 years. Their practice would later take on more partners, eventually becoming the Pike Medical Clinic. Dr. Joe retired in 1990. Joe was preceded in death by his parents, Janet’s parents, his brother, Willis (Bill) Bert Martin and wife Hope, and his son, W. Joe Martin, Jr. He is survived by his wife of almost 68 years, their children, Julie (Gary James), Peter, Bill and Judd, 17 grandchildren, 8 great grandchildren, and many loving nieces and nephews. Joe put his heart and soul into his community of Louisiana and Pike County, but most especially, his wife and family. Arrangements will be made at a later date.

The family of Dr. W. Joe Martin created this Life Tributes page to make it easy to share your memories.