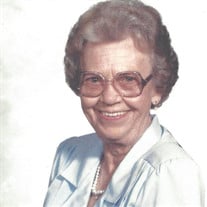 Mrs. Virginia M. Wetzel (nee May), 98, of Louisiana, MO, passed away on April 12, 2019 at the Maple Grove Lodge nursing home in Louisiana, MO where she had been a resident since January 2010. Graveside services will be held at 3:00 P.M. on Sunday, April 14, 2019 at the Riverview Cemetery in Louisiana, MO. The Rev. Pat Glenn will officiate. Virginia was born September 1st, 1920 in Kansas City, Missouri to Clark Benton and Liska Haff May. Virginia was 7 years old when her mother died and she came to Louisiana to live with her father’s sister, Cora V. May. They lived in the two-story red brick house next to the Masonic Temple. Virginia attended grade school and graduated from high school in Louisiana. In high school, she was a member of the Drum and Bugle corps. She was a member of the First Baptist Church. Virginia loved animals and the household always had a dog, cat, fish, even a chicken she named Henny Penny. Her favorite cat, Sam, went to live with her daughter, Charlotte, and always sent flowers on special occasions after she entered Maple Grove. She married John E. Wetzel April 11, 1938. After her husband retired, they enjoyed spending their winters in Tampa, Florida, knowing they would be constantly invaded by family. In the summer evenings, they would go to the Louisiana river front and, under the gazebo, spend time with friends watching the tow boats and the Mississippi River. Virginia is survived by her daughter, Charlotte (John) Wood of Louisiana; son, John (Annice)Wetzel, Columbia; grandchildren, Virginia Lynn Wood, Lebanon, IL; John M. Wood, Jefferson City; Eric (Tammy) Wetzel and great granddaughters, Erica and Alicia Wetzel, White House, TN. She was preceded in death by her parents; her husband of 69 years, John E. Wetzel; and her beloved aunt, Cora V. May. Memorials may be made to Heartland Hospice Care of Wentzville, Shriners Children’s Hospital, or a charity of the donor’s choice. Collier Funeral Home, Louisiana, MO was in charge of arrangements.

Mrs. Virginia M. Wetzel (nee May), 98, of Louisiana, MO, passed away on April 12, 2019 at the Maple Grove Lodge nursing home in Louisiana, MO where she had been a resident since January 2010. Graveside services will be held at 3:00 P.M. on... View Obituary & Service Information

The family of Virginia M. Wetzel created this Life Tributes page to make it easy to share your memories.

Send flowers to the Wetzel family.