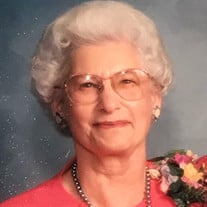 Virginia Ruth Triplett, age 95, of Louisiana, passed away on November 4, 2018, at Maple Grove Lodge in Louisiana. A memorial service will be held on Saturday, December 15, 2018, at 11:00 at the First Christian Church in Louisiana, with Ruth Jones and David Rubemeyer officiating. Virginia was born on May 16, 1923, to William Theodore and Ruby Lame Rubemeyer. She married Charles Forrest Triplett and had 37 years with him until his passing in 1979. Virginia’s beloved son, Forrest Glenn “Skeeter” Triplett, passed away in February 2000, at age 56, while awaiting a heart transplant. Virginia is survived by four grandchildren: Charles L. Triplett (Sherryl) of St. Louis, Heather Triplett Biehl (Bob) of Boston, MA, Amy Triplett Groetsch (Stefan) of Seattle, WA, and Debra Triplett Foersterling (Mark) of St. Louis; daughters-in-law, Margaret Henderson Triplett, of Fernandina Beach, FL, and JoAnn Triplett of St. Louis; sister, Cleo Ransdell, of Louisiana; nine great-grandchildren; one great-great granddaughter; and many nieces and nephews. In addition to her parents, husband, and son, Virginia was preceded in death by two stepsons, C. Robert (Bob) and Edward (Eddie) Triplett; two brothers, William and Raymond Rubemeyer; three sisters, Willella Rubemeyer, Frances Cole, and Naomi Gottman; and all brothers/sisters–in-law. Virginia’s life was full of family, friends, and faith. She loved spending time surrounded by loved ones, telling stories and sharing laughs. Virginia enjoyed jazz and Dixieland music and attended many concerts at the Apple Shed in Clarksville, dancing the night away. She was an avid reader, loved history, and always stayed engaged with current events. Virginia had a special fondness for dolls and built up a large and varied collection over the years; the grandchildren spent many hours exploring her doll room. She also enjoyed refinishing antique furniture and was skilled in the art of caning chairs. She found a love of travel in later life, visiting her grandkids in multiple states and taking a tour of England. Virginia was also known for her cooking and baking; family and friends have many fond memories of time spent at her kitchen table. Virginia worked as a bookkeeper for years at Trost Auto Parts, stayed active in the community, including being part of the ‘Coffee Mates’ group, and was a long-time member of the First Christian Church. Her love and laughter will be missed. Collier Funeral Home in Louisiana, MO in charge of arrangements.

Virginia Ruth Triplett, age 95, of Louisiana, passed away on November 4, 2018, at Maple Grove Lodge in Louisiana. A memorial service will be held on Saturday, December 15, 2018, at 11:00 at the First Christian Church in Louisiana, with Ruth... View Obituary & Service Information

The family of Virginia Ruth Triplett created this Life Tributes page to make it easy to share your memories.

Virginia Ruth Triplett, age 95, of Louisiana, passed away on...

Send flowers to the Triplett family.