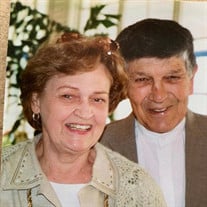 Viola Stelioes passed away from stomach cancer on March 4, 2020, at the home of her daughter's family, in Starkville, Mississippi. She was much beloved and admired, and she will be missed. Viola Josephine Katherine Patrawke Stelioes was born on August 18, 1928, in Brooklyn, New York, to Erich and Erna (Gaebler) Patrawke. When she was seven years old, the family, which now included her brothers Raymond and Georgie, moved to Fairbanks, in the Alaska Territory, where her father had taken a job as a machinist with a mining corporation. The family lived a frontier life on a farm in Fairbanks while Viola's father was working at his job. It was in Fairbanks that Viola made the dear friends that she would remain close friends with for all of her life. Viola and her brothers and mother also spent a significant part of her childhood in Teupitz, Germany, with her mother's family there, before WWII. This time with her relatives was very important to her, and she often told stories about it. Viola was a courageous woman, and a real self-starter. She graduated from high school at 16, and started college at USC (University of Southern California) at 17. She graduated with her Bachelor's in Teaching, and soon was offered a job to teach military children on the American Army base in Berlin. When she returned home to the United States, she shipped home her first car, a VW bug, and drove it alone all the way from New York back to Alaska! She spent the next chapters of her working life as a teacher in many different locations in Alaska. She taught every grade from kindergarten through 12th grade, and she taught all kinds of students from gifted classes to special needs classes. She thrived on adventure and variety. One of her proudest achievements was in being one of the very first teachers who started the new school at Copper Center, Alaska, in the 1950s. In 1959, she went to a dinner at a friend's house. There she met George Stelioes, a handsome fellow teacher in the Anchorage School District. She would later say that she "knew right away" that this was the man she was meant to marry. George felt the same way, and they married on August 18 (her birthday), in 1959 - Alaska's Statehood Year! They opened their home and hearts to many students during the next 10 years, and in 1969, they adopted their own daughter, Anne Frances. Viola and George retired from Alaska in 1978, and moved to the "Lower 48", where they bought a farm in Louisiana, Missouri. They spent many happy years on the farm, raising and showing Arabian horses. In addition to farm life, they both decided that they were not done teaching. Viola taught for several more years, in Bowling Green and in Curryville. In 1980, the family increased, as Viola's nephew came to live on the farm, and be a son to Viola and George, and a brother to Anne Frances. Not yet done with adventure, once Erich went to college, Viola, George, and Anne Frances went back up to Alaska, to teach for three more years in the Alaskan bush. They were lucky enough to work in a village where the famous sled dog race, the Iditarod, came through! After that, it was time to really retire on the farm in Louisiana, MO. But Viola and George never really slowed down. While Anne Frances and Erich went on to finish college, and find jobs and families of their own, Viola and George stayed an active, vibrant part of many people's lives, both in Alaska and in Missouri. George passed away in 2017, and Viola mourned his passing, and missed him greatly. She is survived by her children, Anne Frances Stelioes-Wills and Erich Patrawke, and her grandchildren, Leander, Linden, and Lucy Stelioes-Wills, and Kyndle Liebes-Patrawke. She will be buried next to George at Buffalo-Jordan Cemetery, in Louisiana, Missouri.

Viola Stelioes passed away from stomach cancer on March 4, 2020, at the home of her daughter's family, in Starkville, Mississippi. She was much beloved and admired, and she will be missed. Viola Josephine Katherine Patrawke Stelioes was born... View Obituary & Service Information

The family of Viola Stelioes created this Life Tributes page to make it easy to share your memories.

Viola Stelioes passed away from stomach cancer on March 4, 2020,...

Send flowers to the Stelioes family.