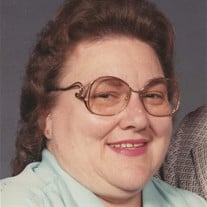 Mrs. Vera Esther Murr, 83, of Louisiana, MO, passed away on Wednesday, April 3, 2019 at the Pike County Memorial Hospital in Louisiana, MO. Funeral services will be held at 3:00 P.M. Sunday, April 7, 2019 at the Collier Funeral Home in Louisiana, MO. The Rev. Randall Cone will officiate. Burial will be at the Summer Hill Cemetery, Summer Hill, IL. Visitation will be held from 1:00 P.M. until 3:00 P.M. Sunday at the funeral home. Vera was born on October 11, 1935 in Nebo, IL to John and Neva Boyle Benjamin. She was married to Clyde Murr on November 23, 1967 at the First Presbyterian Church in Louisiana, MO. He preceded her in death on November 8, 1999. She is survived by 4 sons, John Murr (Jolene) of Louisiana, MO, Charles Murr (Pam) of Counce, TN, Robert Murr of Modesto, CA, and James Murr (Rhonda) of Louisiana, MO, 7 Grandchildren, 1 Step Grandson, 14 Great Grandchildren, a brother, Karl Benjamin of Pittsfield, IL, a sister, Ruth Sevier of Bowling Green, MO, a niece, Renee Sevier, a nephew, Steve Sevier (Krystal), and cousins. She was preceded in death by her parents, John and Neva Benjamin, and her husband, Clyde Murr. Vera was a graduate of Pleasant Hill High School with the Class of 1953. She had worked as a receptionist and PBX Operator at Stark Bros. Nursery from 1954 until her retirement in June 2003. She was a member of the First Presbyterian Church in Louisiana, MO and had served as a Deacon and was a past Woman of Faith in the church. She enjoyed gardening and tending flowers. She liked reading and country music. Pallbearers will be Karl Benjamin, Steve Sevier, Gabriel Murr, Jonathan Murr, Eric Murr, and Christopher Murr. Memorials may be made to the First Presbyterian Church, Louisiana, MO, the American Diabetes Association, or the Parkinson’s Association.

The family of Vera Esther Murr created this Life Tributes page to make it easy to share your memories.

Send flowers to the Murr family.