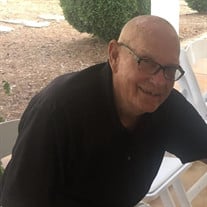 Thomas W. Wallace, 83, Of Louisiana passed away peacefully in his home July 9, 2020. He was born March 30, 1937 to William and Lucille Wallace, of Clarksville, Missouri. Tom was a graduate of Clopton High School in 1956. He then served in the United States Army from 1956 – 1959. Tom obtained the rank of Sergeant while stationed in Germany. When Tom returned home in 1959, he met the love of his life, Lona Dewey. They married on March 11, 1960, and recently celebrated their 60th anniversary. Tom is survived by his wife Lona Wallace, his two children, Thomas R. Wallace and Elizabeth, and Stacey Wallace Dandino and Tony, and his two grandchildren, William T. Wallace and Emily, and Amelia J. Kohler and Stephen, and many brothers in law, sisters in law, nephews, nieces, and cousins. Tom was preceded in death by his son, William Karl Wallace, parents, William and Lucille Wallace and sister, Jane Morrow. He was employed by Ameren Union Electric for 35 years. He was Mayor of Louisiana for 26 years. During his time as mayor, the city accomplished numerous improvements, including: the purchase of the current city hall, Wallace Memorial Ballpark, Industrial Park, and many additions to public facilities and utilities. Tom was a member of the First Baptist Church, Elks Lodge 791, and American Legion Post 370. Tom served on the following committees: Highway 54 and Bridge Coalition, Natural Resource Conservation of Soil and Water, Pike County Development Authority, Bicentennial Committee, Sesquicentennial Committee, and Bulldog Booster Committee. He volunteered his time with the Khoury League and Boy Scouts and enjoyed spending his time with family, golfing, hunting, working on the farm, and listening to Cardinals baseball games. Visitation will be held Saturday, July 18, 2020 at the First Baptist Church in Louisiana, MO from 9:00 A.M. until 11:00 A.M. Funeral services will begin at 11:00 A.M. Dr. Bill Maupin will officiate. Burial will be in the Riverview Cemetery following the service. Memorials may be given to the Pike County Home, Health & Hospice in care of Collier Funeral Homes, Inc., 117 Barnard Drive, Louisiana, MO 63353.

Thomas W. Wallace, 83, Of Louisiana passed away peacefully in his home July 9, 2020. He was born March 30, 1937 to William and Lucille Wallace, of Clarksville, Missouri. Tom was a graduate of Clopton High School in 1956. He then served in the... View Obituary & Service Information

The family of Thomas "Tom" W. Wallace created this Life Tributes page to make it easy to share your memories.

Thomas W. Wallace, 83, Of Louisiana passed away peacefully in...

Send flowers to the Wallace family.