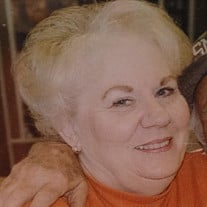 Mrs. Sharon S. Dillender, 71, of Louisiana, MO, passed away at her home surrounded by her family on July 18, 2021. A memorial visitation will be held from 11:00 A.M. until 2:00 P.M. on Saturday August 7th at the Centenary United Methodist Church in Louisiana, MO. A memorial celebration of life service will follow at 2:00 P.M. Saturday at the church. Sharon was born on January 1, 1950 in Louisiana, MO to James Bandy and Bonnie Jamieson. She was married to John Dillender on January 29, 1972 in Louisiana, MO and he survives. She is also survived by a son, Stephen Dillender (Kim), 2 daughters, Bonnie Dillender, and Tracy Kingsley (Mike), step-children, Ann Maly & family, and Connie Dewey & family, 4 grandchildren, Kirsten Dillender (Josh), Alexis “Ali” Dillender, Stephen “Stevie” Dillender II, and Isabella “Issy” Kingsley, a sister, Lori Crane (Jerry), and numerous nieces and nephews that she loved dearly. She was preceded in death by her parents, James Bandy and Bonnie Jamieson, sisters, Judy Niemeyer and Pam Calvin, and a step-son, John Dillender II. Sharon was a lifelong resident of Louisiana, MO. She was a graduate of Louisiana High School with the Class of 1968. She was a member of the Centenary United Methodist Church in Louisiana, MO and was a longtime member of the United Methodist Women’s Group. She was a stay-at-home mom in her early adult life. She devoted her time to raising her children, volunteering at school, and becoming a Girl Scout leader for both of her daughter’s troops. She served several years ago on the board of Pike Pioneers, spent many years as the Girl Scout town chairperson and, after seeing both troops through their Gold Awards, went to work for a short time with the Becky Thatcher Area Girl Scout Council. Soon she was asked to work at Rub-A-Dub Laundromat, and from there, moved to The Mercantile Bank of Louisiana, MO on September 26th, 1992, where she worked as a teller and then moved into bookkeeping. She was currently employed as head bookkeeper and was an officer at the bank. Sharon also served on the Louisiana School Board from 1999 to 2014. Sharon was an avid reader and loved working crossword puzzles and watching Jeopardy. She enjoyed her annual anniversary dance in the kitchen with John as “Could I Have This Dance” played on the radio, requested by John for many years. She enjoyed spending time with her family and especially her beloved grandchildren Kirsten Dillender (Josh), Alexis “Ali” Dillender, Stephen “Stevie” Dillender II, and Isabella “Issy” Kingsley, often playing, cooking, laughing, watching ball games, or talking with them about their latest adventures. Sharon was always quick with a song or a laugh and had the ability to light up a room. She will be deeply missed by her family and friends. Cremation rites are being provided by Collier Funeral Home in Louisiana, MO. On-line condolences may be sent at www.collierfuneral.com. Memorials can be made to Centenary United Methodist Church in Louisiana, MO.

Mrs. Sharon S. Dillender, 71, of Louisiana, MO, passed away at her home surrounded by her family on July 18, 2021. A memorial visitation will be held from 11:00 A.M. until 2:00 P.M. on Saturday August 7th at the Centenary United Methodist Church... View Obituary & Service Information

The family of Sharon S. Dillender created this Life Tributes page to make it easy to share your memories.

Send flowers to the Dillender family.