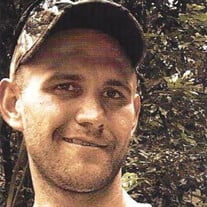 Seth Jacob Elliott, 28, of Louisiana, MO, died Monday evening, November 28, 2016, from injuries received after being struck by a vehicle on Route NN. Funeral services will be held at 1:00 P.M. on Saturday, December 3, 2016 at the Collier Funeral Home in Louisiana, MO. The Rev. Terry Cook will officiate. Burial will be at the Riverview Cemetery in Louisiana, MO. Visitation will be held from 4:00 P.M. until 8:00 P.M. on Friday, December 2nd at the funeral home. Pallbearers will be Joey Still, Clinton Lindsay, Lee Wernowsky, Cody Bowler, Marcus Jones, and Joseph Harrison. Seth was born on August 17, 1988 in Hannibal, MO to John and Becky Elliott. He was born only 4 minutes before his twin sister. He was married October 19, 2013 to Amanda Powell of Clarksville, MO, and she survives along with his 2 sons, Camdon (Age 6) and Hunter (Almost 3). Seth is also survived by his parents, his brothers, Matt Ince (Angie) of Louisiana, MO, Kyle Elliott and significant other April Perkins of Bowling Green, MO, and Zachary Elliott (Sarah) of Curryville, MO, his sisters, Jenny Dowell (Roger) of Louisiana, MO, his twin sister, Samantha Johnston (Adam) of Bowling Green, MO, and Brenda VanHooser of Bowling Green, MO, and many nieces & nephews, aunts & uncles, and cousins. Seth was preceded in death by 2 brothers, Chad Elliott in August 1993, and John Elliott, Jr. in September 1995, and grandparents Ralph & Darlene Ince, and Lester Jr. & Peggy Elliott. Seth graduated from Louisiana High School in 2007, and this was a major milestone in his life. Many individuals played a major part in this accomplishment. School was never a comfortable place for Seth and obstacles (many of his own doing) seemed to often stand in his way. Many of the choices made by Seth were not always in his favor. Fortunately, he never gave up trying to better himself and his family never gave up believing in him, and he turned his life around starting about four years ago and had become a wonderful young man. His love for his family was evident, and he will live forever in the hearts of all those who knew and loved him. His smile lit up his face and he would usually be seen wearing a cap with his shades either on his cap or his face, a t-shirt, blue jeans, and work boots. Seth was currently employed a Woods Smoked Meats in Bowling Green, MO as a meat processor. He was previously employed at Sterling Lumber in Louisiana, MO. He was always willing to tackle and learn any task that he was asked to do. He enjoyed road trips with his family, tinkering and repairing mechanical items, fishing, cookouts at the family farm, and spending time with his family. Memorials may be made to the family for an Educational Fund for his children in care of Collier Funeral Homes, Inc., 117 Barnard Drive, Louisiana, MO 63353.

Seth Jacob Elliott, 28, of Louisiana, MO, died Monday evening, November 28, 2016, from injuries received after being struck by a vehicle on Route NN. Funeral services will be held at 1:00 P.M. on Saturday, December 3, 2016 at the Collier Funeral... View Obituary & Service Information

The family of Seth Jacob Elliott created this Life Tributes page to make it easy to share your memories.

Send flowers to the Elliott family.