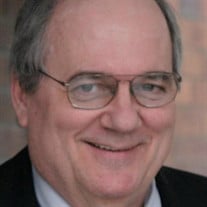 Richard Scott Thiel, 73, died peacefully at his farm in Louisiana, MO on February 28, 2021. He was born October 31, 1947 in Providence, Rhode Island, the second son of George Francis Thiel and Margaret Mae (Darden) Thiel. Survivors include his daughter, Maggie Lynn (Thiel) Neff, her husband Myles Neff of Louisiana, MO, and granddaughters, Kyndell, Roselyn, and Georgia Neff. His partner, Amanda Sherwin, survives, as well as numerous nieces, nephews, and cousins. He was preceded in death by his parents, his brother, George Thiel, sister, Judy (Thiel) Berlemann, wife, Michelle “Mickey” (Schallert) Thiel, and best friend and farm partner, Jeanette Stein. Scott’s father, a Navy man, was part of the crew that searched for Amelia Earhart. He moved his family according to his postings, ending in his native St. Louis where the family settled in the 1950’s. Scott spent his early years in Florida, and summers on a family farm in Kentucky. An entrepreneur by nature, Scott built successful businesses throughout his life, starting with a lawn-mowing and odd jobs business at age nine. He was fascinated by tropical fish, and built industry-leading sales departments for two St. Louis businesses while still a teen. He joined the Marines in 1968 to serve his country. After his service he joined a group developing cutting edge newspaper inserts and lived in New York, New Jersey, Boston, and Ontario while launching the business. He settled in St. Louis in the mid-1970’s, launching a variety of businesses including a pet store, realty firm and rental properties. Scott also used his tremendous selling skills with diverse local businesses such as computers, insurance, swimming pools, and camper tops. It was said he could sell catsup popsicles to white-gloved ladies. In 1984 he married Michelle “Mickey” Schallert, and Maggie Lynn Thiel was born the following year. Shortly after this he hurt his back while working. Forced to rest, he reassessed his life as a new father, and realized that some of his best times had been working on the family farm as a child. Together with next door neighbors the Steins, he purchased property in Louisiana MO. While working the farm, raising livestock and planting an orchard, he continued to build and run small businesses. He became known around the community for his abilities with tools, from backhoe to screwdriver. Friend and local pharmacist Bob Martin recalled how his window overhang fell one year. Scott showed up, screwdriver in hand, and fixed the overhang without saying a word. Scott defined the term, “devoted father.” He was fully involved in his daughter’s life, sometimes to her dismay. When she graduated from law school, attendees could hear him shouting “Goomba” as she left the stage. When she decided to teach school, his hopes of seeing her as a second Sandra Day O’Connor were dashed, but he fully supported her decision to pursue her passion. He was immensely proud of her. When grandchildren came along, Scott gloried in being “Papa Scotty.” He may have gone a little over the top giving Kyndell, the oldest, a car for her second birthday, but he delighted in holding the children and watching them play. Mr. Thiel was a member of the Elks, the Masons, and the American Legion, as was his father. He was a Deacon at the First Baptist Church for many years. Mr. Thiel’s wishes were to be cremated and have his ashes scattered on his farm. A memorial service will be held when the weather improves. Collier Funeral Home in Louisiana, MO was in charge of arrangements.

Richard Scott Thiel, 73, died peacefully at his farm in Louisiana, MO on February 28, 2021. He was born October 31, 1947 in Providence, Rhode Island, the second son of George Francis Thiel and Margaret Mae (Darden) Thiel. Survivors include his... View Obituary & Service Information

The family of Scott Thiel created this Life Tributes page to make it easy to share your memories.

Richard Scott Thiel, 73, died peacefully at his farm in Louisiana,...

Send flowers to the Thiel family.