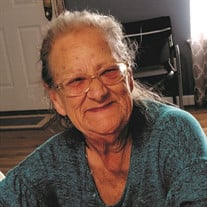 Sarah Marie Morgan was born June 12, 1944 in Louisiana Missouri to Ellis Elmer Minor and Cecil Dell Chandler. Sarah gave up her fight with diabetes on April 8, 2020 at St. Joseph Hospital in St. Charles. Sarah was married to John Allen Morgan of Eolia January 17, 1963. Sarah and John farmed in Eolia and Sarah was a CMT for many years at Rosedale Nursing Home in Silex. She later worked as a store clerk in Louisiana, Eolia, and then Troy until her retirement. Survivors include husband John, daughters Doris Henderson (Joseph) of Louisiana, Mona Brown (Robert) of Louisiana, and Son Robert Morgan of Eolia, granddaughters Kristina Tibbits (James) of Troy, Samantha Henderson of Louisiana, and one great granddaughter Adalind Tibbits of Troy, one brother James Henry of Louisville KY his spouse and her special friend Dr. Don Goolsby of Louisville KY, and one sister Janet Coslet. She had many special neighbors, one that she thought of as a sister – Barbara Welch and her children. Sarah was preceded in death by her parents, sisters Beatrice (infant), Garnet Lambert, and Mary Darnell, and brother Elmer Minor. Sarah had many nieces, nephews and cousins, and never knew a stranger. She devoted her life to taking care of those around her. She had many military men and women that she regularly sent home canned goods to as well as special treats she had made. As a lifelong American Legion member, Sarah was active many years with the American Legion Junior Girls in Clarksville. She organized bake sales to make funds to purchase fruit and baked goods for the residents at the Mexico Veteran’s home. She took great pride in the many years of providing special treats to the residents of the Veteran’s Home and received several “benefactor” awards for her donations over the years. She routinely cooked more than she and her family could eat so that she could share with her neighbors and visit with them. Her kids, grandkids, and great granddaughter Adalind were her life’s joy. She loved to attend her kids’ events and later her granddaughters’ sporting events and school programs. She and her son enjoyed a love of cooking, often sharing recipes. She and John loved to camp and fish, often going for weeks at a time to their favorite spot at Thomas Hill. Friday nights were reserved for Bingo at Clarksville where she went for the conversation and socializing as well as the game. Canning and cooking were passions that she shared with those around her, if you knew her, you probably had a jar of her Jelly or Salsa in your cabinet. She loved all the customers she met through her job as a convenience store clerk, and maintained many of those friendships after her retirement. Sarah’s family have chosen to have a memorial service at a later time hopefully near her birth date, to include all those who would like to celebrate her life and send her a final farewell. Memorials may be given to the USO of Missouri, 10701 Lambert International Blvd, PO Box 10367, St. Louis, MO 63145. Cremation rites were provided by Collier Funeral Home, Louisiana, MO.

The family of Sarah Marie Morgan created this Life Tributes page to make it easy to share your memories.

Send flowers to the Morgan family.