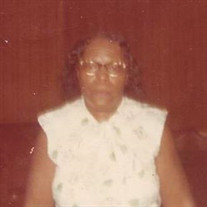 Mrs. Sarah Jane Grimmett, 96, of Quincy, Illinois formerly of Clarksville, Missouri passed away Tuesday, March 31, 2015 at her home in Quincy. Funeral services will be held at 2:00 p.m. Monday, April 6, 2015 at the Collier Funeral Home in Louisiana,... View Obituary & Service Information

The family of Sarah Jane Grimmett created this Life Tributes page to make it easy to share your memories.

Send flowers to the Grimmett family.