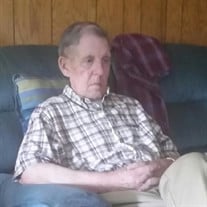 Mr. Samuel Joseph Kilby, 80, of Louisiana, MO, passed away on Thursday, January 3, 2019 at his home near Louisiana, MO. Funeral services will be held at 12:00 P.M. on Monday, January 7, 2019 at the Collier Funeral Home in Louisiana, MO. Rev. Greg Wyble will officiate. Burial will be at the Jordan-Buffalo Cemetery near Louisiana, MO. Visitation will be held from 10:00 A.M. until time of service Monday at the funeral home. He was born on June 28, 1938 in Louisiana, MO to Harry Kilby and Edith Pitzer Kilby. He was married to Roberta White on August 19, 1956 in Hernando, MS and she preceded in death on February 28, 2017. He is survived by a son, Kevin Kilby (Wanda) of Louisiana, MO, a daughter, Cindy Law (Greg) of Bay Minette, AL, 3 grandchildren, Jesse Law Naessens of Bay Minette, AL, Samantha Kilby, and Zach Kilby both of Louisiana, MO, 2 great grandchildren, Austin Naessens and Logan Naessens of Bay Minette, AL, a sister, Mary Lou Tucker of Eolia, MO, and many nieces and nephews. He was preceded in death by his parents, Harry and Edith Kilby, his wife, Roberta Kilby, and a grandson, Jarrod Law. Samuel was a lifelong resident of Louisiana, MO. He was a graduate of the Louisiana, High School in 1955. He was employed by Hercules, Inc. in Louisiana, MO for 39 years retiring in 1997. He had also operated his own TV repair service. He was a member of the OCAW Local 5 713 and had served as President for many years. He had taken care of the old ballpark for the Khoury League and he loved gardening growing a variety of things. Honorary pallbearers will be Gene Applebaum, Terry Smith, Bob Woods, Jim Pitzer, Bob Kilby, Donnie Tucker, Tara Humphreys, and Tammy Miller. Active pallbearers will be Jimmy Pitzer, Ryan White, Stacey Shade, Jesse Naessens, Zach Kilby, and Samantha Kilby. Memorials may be made to the Pike County Hospice.

The family of Samuel Joseph Kilby created this Life Tributes page to make it easy to share your memories.

Send flowers to the Kilby family.