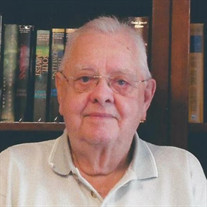 Mr. Russell Davis Ransdell, 86, of Louisiana, Missouri passed away Sunday, June 12, 2016 at his home in Louisiana. His desire was to be cremated. Memorial services will be held at 1:00 p.m. Friday, June 17, 2016 at the First Christian Church in Louisiana. The Rev. Jimmy Spears will officiate. Visitation will be held from 11:00 a.m. until time of service at 1:00 p.m. Friday, June 17th at the church. Burial of the cremains will be in the St. Clement Cemetery with Father Bill Peckman officiating. Russell was born January 16, 1930 in Frankford, Missouri the son of Carl and Thelma Dowell Ransdell. He married Ruby Cleo Rubemeyer October 1, 1950 at the First Christian Church in Clarksville, Missouri. Russell is survived by his wife Ruby Cleo Ransdell of the home, one son; Kevin Davis Ransdell of Louisiana, Missouri, one daughter; Brenda Kay Steinly of Louisiana, Missouri, two sisters; Verna Keim (Marion) of Elsberry, Missouri and Myrtle Riggs (Ron) of Hannibal, Missouri and many nieces and nephews. He was preceded in death by his father, Carl Ransdell in 1947, his mother; Thelma Ransdell in 1971, two grandchildren; Garrett Davis Steinly in 1995 and Jason Ray Steinly in 2002, a brother; John Birney Ransdell in 2003 and a sister; Rose Mary Wright in 2014. He had attended the Hannibal High School in Hannibal, Missouri. He was a veteran serving with the United States Army in the Korean Conflict from 1951 thru 1953. He had been employed as a Fire and Safety Inspector for Hercules Chemical Co. for 35 years until his retirement in 1992. He was a member of the First Christian Church in Louisiana. Russell enjoyed wood working, listening to Jazz music, and visiting with his friends. Memorials may be given to the First Christian Church or to Pike CO Nutrition Center in care of Collier Funeral Homes, Inc., 117 Barnard Dr., Louisiana, MO 63353.

Mr. Russell Davis Ransdell, 86, of Louisiana, Missouri passed away Sunday, June 12, 2016 at his home in Louisiana. His desire was to be cremated. Memorial services will be held at 1:00 p.m. Friday, June 17, 2016 at the First Christian Church... View Obituary & Service Information

The family of Russell Davis Ransdell created this Life Tributes page to make it easy to share your memories.

Send flowers to the Ransdell family.