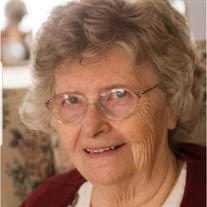 Rosemary Jean Lesley, age 92, of Louisiana, Missouri passed away peacefully February 26, 2019 at Pike County Memorial Hospital surrounded by her family. She was born January 24, 1927, in St. Louis, Missouri,the daughter of Leon D. and Lissetta (Hoeft) Crider. Jean was a 1944 graduate of Rosati-Kain Catholic Girls High School in St. Louis, Missouri. She was united in marriage to Charles Raymond Lesley, April 22, 1950 in St. Louis, MO. Charles, Jean and family relocated to Louisiana, Missouri in 1963. Charles preceded her in death, August 23, 1989. Jean and her husband were co-owners of Lesleys Printing Company and Hallmark store since 1969. Survivors include four children, Charles (Kay) Lesley of St. Peters, Missouri; Kathy Smith, Nancy Lesley, and Michael (Charity) Lesley of Louisiana, Missouri; fifteen grandchildren, twenty-six great-grandchildren; and two great-great-grandchildren. Jean took an active part in her community and St. Joseph Church. She was the President of the PTA, a Girl Scout leader and an active member of Ladies Sodality. She took a roll in the planting of trees and the beautification of the downtown area. A Memorial Mass will be held at 11:00 A.M. on Saturday, March 2, 2019 at the St. Joseph Catholic Church in Louisiana, MO. The Father Lou Dorn officiating. Visitation will be held from 9:00 A.M. until time of service Saturday at the church. Interment will be at the St. Joseph Catholic Cemetery at a later date. In lieu of flowers, memorials are suggested to St. Jude Children's Hospital, St. Joseph Catholic Church, or the donor’s choice. Collier Funeral Home was in charge of cremation rites.

The family of Rosemary Jean Lesley created this Life Tributes page to make it easy to share your memories.

Send flowers to the Lesley family.