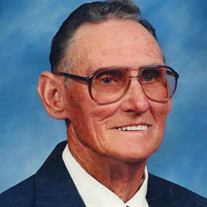 Mr. Robert Ray Capps, 84, of Louisiana, Missouri passed away Wednesday, January 21, 2015 at his home in Louisiana. His desire was to be cremated. Memorial services will be held at 2:00 p. m. Friday, January 30, 2015 at the Collier Funeral Home in Louisiana. The Rev. Don Kelley will officiate. Visitation will be held from 10:00 a. m. until time of services at 2:00 p. m. Friday, January 30th at the funeral home. Burial will be in the Fairview Cemetery near Louisiana. He was born July 28, 1930 in Pleasant Hill, Illinois the son of Owen and Bertha Clark Capps. He married Patricia Mae Sloan October 1, 1995 in Louisiana, Missouri and she survives. He is also survived by three daughters; Elaine Anderson (Mike) of Clarksville, Missouri, Melody Deweese (Denny) of Louisiana, Missouri and Shelly Rosenmiller (Randy) of St. Charles, Missouri, Five step-sons; Jay Darnell (Bona) of Coalinga, California, Bennie Darnell (Trisha), Greg Darnell (Anna) and Neil Darnell (Jennifer) all of Louisiana, Missouri and Phillip Brown (Andrea) of Washington, Missouri, Two sisters; Doris (Ted) Roberts of Chico, California and Jeanie (Tony) Stark of Louisiana, Missouri, Grandchildren, Gt. Grandchildren, Nieces and Nephews . He was preceded in death by his parents, Owen and Bertha Clark Capps and a grandson, Ryan Brown who died in 2005. Bob was a veteran serving with the United States Navy during the Korean Conflict. He had owned and operated Uregas L P Company in Louisiana for a number of years. He was later employed as an Electrician for P & S Electrical Company and D & W Plumbing Company in Louisiana for a number of years. Then he was employed at the Louisiana Elementary School until he retired. He attended the First Baptist Church in Louisiana and was a member of American Legion Post 370 in Louisiana. Bob loved his family and enjoyed spending time with his children and grandchildren. He also enjoyed playing Horseshoes, fishing and spending time with his friends at the Trimble House in Louisiana. Memorials may be given to St. Jude’s Hospital in care of Collier Funeral Homes, Inc., 117 Barnard Dr., Louisiana, M0 63353

Mr. Robert Ray Capps, 84, of Louisiana, Missouri passed away Wednesday, January 21, 2015 at his home in Louisiana. His desire was to be cremated. Memorial services will be held at 2:00 p. m. Friday, January 30, 2015 at the Collier Funeral Home... View Obituary & Service Information

The family of Robert Ray Capps created this Life Tributes page to make it easy to share your memories.

Send flowers to the Capps family.