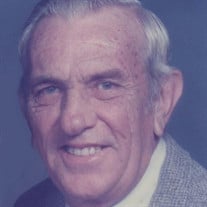 Mr. Robert “Bob” Gene Woods, 92, of Louisiana, MO. went home to be with his Lord and Savior on Monday afternoon, March 2, 2020. Bob was born November 12, 1927 to Roland and Lola Strother Woods. He married Marian Edith Hallows Woods on December 5, 1949. Marian preceded him in death on December 30, 2005. Together they had two sons, David Eugene Woods and Kenneth Lee Woods. Kenneth preceded his father in death on September 11, 2016. Bob was drafted into the United States Army in 1946 and served in Korea until 1948. He was very proud to earn the rank of Sergeant and serve his country. Bob worked for Stark Bro’s Nursery and later worked for Hercules, Inc. for 35 years before retiring early to hunt, trap and travel with his late wife, Marian. During his years at Hercules, Bob was very involved in the OCAW 5713 Union, serving as Vice President. When Bob and Marian’s grandchildren were young, they enjoyed spending time with them and often served as chauffeurs, picking them up from school and running them to all of their different activities and friends’ homes. Bob was an outdoorsman. He enjoyed hunting, trapping, mushroom hunting, and riding around on his four-wheeler and ranger with his sons, and a dear friend Gary Branham. Bob also enjoyed teaching a special nephew, Tylier, how to hunt and trap. They also spent a lot of time riding around on his acreage in Lincoln County, Missouri, which was a very special place for him. Bob was very thankful for a special niece, Julie Richardson, who spent so much time caring for him in his last few months. Bob was a member of the First Baptist Church of Louisiana, MO. He is survived by his son, David Woods (Marilyn), his daughter-in- law, Donna Jenkins Woods, all of Louisiana, MO, his granddaughters, Heather Durbin (Steven) of Osage Beach, MO, and Whittney Lee (Kris) of O’Fallon, MO, his great grandchildren, Laura, Wade, Bennett, and Evelyn Durbin of Osage Beach, MO, two sisters in-law, Louise Carlberg, and Jayne Woods, both of Louisiana, MO, and several nieces, nephews, and cousins. Bob was also preceded in death by 3 sisters, Evelyn Stumbaugh, Floretta Crow, and Martha Lou Harrelson, one brother, Roy Woods, and his granddaughter, Laura Lee Woods. Visitation will be held from 1:00 P.M. until 3:00 P.M. on Thursday, March 5, 2020 at the Collier Funeral Home in Louisiana, MO. Funeral services will follow at 3:00 P.M. The Rev. Bill Maupin will officiate. Burial with military honors will be at the Fairview Cemetery near Louisiana, MO. In lieu of flowers, memorial donations may be made to the Laura Lee Woods Scholarship Fund, Heartland Hospice, or the First Baptist Church of Louisiana, MO in care of Collier Funeral Homes, Inc., 117 Barnard Drive, Louisiana, MO 63353.

The family of Robert "Bob" G. Woods created this Life Tributes page to make it easy to share your memories.

Send flowers to the Woods family.