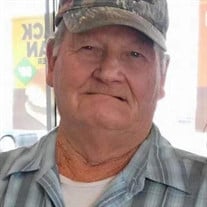 Mr. Robert “Bob” Irvin Sr., 79, of Louisiana, MO, passed away on Monday June 28, 2021 at the Maple Grove Lodge nursing home in Louisiana, MO. Cremation rites will be provided according to his wishes by Collier Funeral Home, Louisiana, MO. A Celebration of Life may be held at a later date. Bob was born on July 7, 1941 in Elsberry, MO to Samuel L. Irvin and Laura E. Hardin Irvin. He was married to Nancy Nadine DeGeare on April 22, 1961 in Elsberry, MO and she preceded him in death on December 10, 2014. He is survived by a son, Robert Irvin Jr. of Bowling Green, MO, 3 daughters, Debbie Irvin of Hannibal, MO, Laura Snyder (George) of Barry, IL, and Cheryl Colston of Bowling Green, MO, his grandchildren, James (Susie) Voitik II of Florida, Kevin Voitik of Louisiana, MO, Andrew Presley of Clarksville, MO, Shane Zumwalt of McHenry, IL, Alyssa (Michael) Crigger of Louisiana, MO, Marcus (Tara) Jones of Louisiana, MO, Danielle Griffith of LaGrange, MO, Kody (Amber) Irvin of St. Louis, MO, Jessi (Brett) Robbins of Barry, IL, Rodney Blake Snyder of Barry, IL, Jorden Colston of Hull, IL, and Brooke Colston of Bowling Green, MO, and numerous Great Grandchildren that were very special to him, a brother, Albert Irvin Sr., 3 sisters, Doris Silvey of Santa Fe, MO, Velma McCormick of Rock Springs, WY, and Alice Dawson of Louisiana, MO, a daughter in-law, Michelle Griffith, and numerous nieces, nephews, and cousins. He was preceded in death by his parents, Samuel and Laura Irvin, his wife, Nancy Irvin, a daughter, Nadine White, a granddaughter, Samantha Griffith, and siblings, Donald Irvin Sr., Samuel Irvin Jr., Delmar Irvin, Norman Irvin Sr., and Edna Harvey. Bob went to work at an early age to help support his family. Over the years he had many jobs. Was employed by Lomax in Quincy, IL, worked as a mechanic and a truck driver, and later did small engine repair and service. He was considered a “jack of all trades” and could do many other things. He enjoyed fishing and playing cards, but most of all loved spending time with his family and grandchildren. Memorials may be given to the family in care of Collier Funeral Home.

The family of Robert "Bob" W. Irvin created this Life Tributes page to make it easy to share your memories.

Send flowers to the Irvin family.