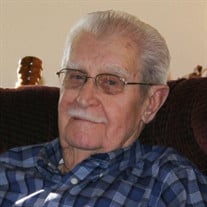 Mr. Richard L. Edwards, 100, of Louisiana, MO, passed away on Tuesday, December 17, 2019 at the Lynn’s Heritage House in Louisiana, MO. Funeral services will be held at 11:00 A.M. on Saturday, December 21, 2019 at the Collier Funeral Home in Louisiana, MO. The Rev. Mike Haldeman assisted by Gary Crowder will officiate. Burial will be at the Crescent Heights Cemetery in Pleasant Hill, IL. Visitation will be held from 9:30 A.M. until time of service Saturday at the funeral home. Richard was born on August 19, 1919 in New Hartford, MO to Willie Edwards and Bertha Trower Edwards. He was married to Deama Ilene Gray on October 19, 1940 and she preceded him in death on November 6, 2012. He is survived by a brother, Bill Edwards of St. Louis, MO, numerous nieces and nephews, and numerous great nieces and nephews. He was preceded in death by his parents, his wife, 2 sisters, Emma Belle Clithero, and Maxine Hays. He was a veteran serving in the US Army. He was employed at Abel Oil Co. for 40 years until his retirement. He also had farmed in Pike County over the years. He was a member of the 1st Assembly of God Church in Louisiana, MO. Honorary pallbearers will be Kelsey Balassi, Erin Eaves, Emily Lesh, and Ron Kagy. Active Pallbearers will be Ryan Gray, Brandon Gray, Chad Gray, Trevor Gray, Eric Lesh, and Windsor Eaves. On-line condolences may be sent at www.collierfuneral.com.

The family of Richard L. Edwards created this Life Tributes page to make it easy to share your memories.

Send flowers to the Edwards family.