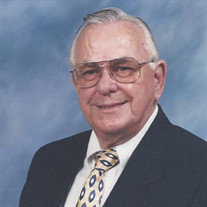 Mr. Raymond L. Trost, 88, of Louisiana, Missouri passed away Saturday, March 21, 2015 at the Maple Grove Lodge Nursing Home in Louisiana. Funeral services will be held at 11:00 a.m. Tuesday, March 24, 2015 at the Collier Funeral Home in Louisiana, Missouri. The Rev. Bill Maupin will officiate. Visitation will be held from 9:00 a. m. until time of services at 11:00 a.m. Tuesday, March 24th at the funeral home. Burial will be in the Riverview Cemetery in Louisiana. He was born October 14, 1926 at St. Mary’s Hospital in St. Louis, Missouri the son of Ferdinand and Gladys Dunbar Trost. He married Charlotte Mae Holland June 23, 1951 at the First Presbyterian Church in Louisiana, Missouri. Charlotte preceded him in death May 17, 2004. Ray is survived by his son, Barry Trost (Judy) of Louisiana, Missouri, one grandson; Jonathon L. Trost (Tonya) of Louisiana, Missouri, one granddaughter; Christina Maria Krenzel (Paul) of Camdenton, Missouri, Five great-grandchildren; Kyle McKenna, Clinton McKenna, Chase Cagle, Cale Krenzel and Mila Krenzel and nieces and nephews. He was preceded in death by his parents, Ferdinand and Gladys Trost and a brother Fred Trost who died in July of 1996. Ray had owned and operated “Trost Auto Parts” in Louisiana and had remained active in the business until ill health forced him to retire. He was a member of the First Baptist Church in Louisiana. He had been very active in the church serving as a Deacon and singing in the Choir. He had also served as a missionary for the church. He had been active in the community and had served on the “Bank of Louisiana” bank board for a number of years. Honorary pallbearer; Dickie Holland, Active pallbearers are: Gary Holland, Richie Holland, Paul Krenzel, Chase Cagle, Jonathon Trost and Roger Sperry. Memorials may be given to the Alzheimer’s Association in care of Collier Funeral Homes, Inc., 117 Barnard Dr., Louisiana, M0 63353 Online condolences may be sent to collierfuneral.com

The family of Raymond L. Trost created this Life Tributes page to make it easy to share your memories.

Send flowers to the Trost family.