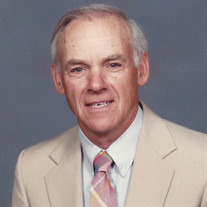 Raymond Eugene Dolbeare passed from this earth Sunday morning, October 25, 2015, at his home in Louisiana, MO, surrounded by his loving family. Ray was 89 years, 11 months, and 5 days old. Funeral services will be held at 10:00 A.M. on Wednesday, October 28th at the First Baptist Church in Louisiana, Missouri. The Rev. Bill Maupin will officiate. Burial will be at the Riverview Cemetery in Louisiana. Visitation will be held from 4:00 P.M. to 8:00 P.M. Tuesday, October 27th at the Collier Funeral Home in Louisiana. Ray was born November 19, 1925 in Derry Township, Pike County, Illinois. He married Betty Lou Shuford in Louisiana, November 18, 1950. She survives. They have three sons, Gregory Alan (Edna), Rodney Miles (Jessica) of Louisiana, and Eric Eugene (Roberta) of Nebo. Six grandchildren and two step grandchildren: Jenna Simonsen, Cliff Dolbeare, Samuel Dolbeare, Elissa Dolbeare, Emma Rester, Madison Dolbeare, Keileigh Prior, and Colin Prior. Three great grandchildren: Lilly Dolbeare, Ella Dolbeare, and Eric Simonsen. Ray was well known in the community as a business man and grain elevator manager. He served as general manager for 23 years at the MFA Grain Terminal in Louisiana. After leaving the elevator in 1983, he was engaged in farming. He was active in the operation of the farm until recent years, when his sons continued the operation. Ray was a member and ordained deacon of the First Baptist Church of Louisiana, Missouri. Many of Ray’s interests revolved around his faith, his family, his farming, and his friends. He had a keen sense of humor and enjoyed life in many ways: attending Louisiana football games, watching his sons play in the 1970’s and 1980’s. At one game, a possum ran on the field and appeared to die. Ray was quick to quip: “He’s not dead, he’s playing possum!” Ray enjoyed golf; enjoyed teaching his sons to play; and enjoyed telling about the time he scored a hole-in-one on #9 at Pike County Country Club at the age of 70. He was an accomplished bowler, once rolling a 289 game and a 715 3-game series. He was the longest standing member of the Louisiana Rotary Club, having been a member for over 50 years. He was a classic car enthusiast, belonging to the Jacksonville Illinois Antique Car Club for many years. He owned a ‘39 Ford, and two Mustangs, which he enjoyed showing in area car shows. He never tired of “talking shop” with his sons, or anyone who wanted to talk farming. Ray attended Crozier Grade School, Barry High School, and Gem City Business College. One of his favorite sayings was “There is always room for the little guy if he is willing to work.” He helped his father in the saw mill and lumber trade, prior to getting married. He was a member of the Army Air Force, having served in the Army Air Transport Command in West Palm Beach, Florida, and Presque Isle, Maine, toward the end of World War II. Ray was preceded in death by his father Harry Alfred Dolbeare and his mother Luella Miles Dolbeare, and nine brothers and sisters: Marjorie, Fern, Herschel, Lucy, Rachel, Donald, Alfred, Mary Ellen, and Kenneth. Two sisters survive, Anna and Georgia. Honorary Pallbearers will be Mike Shannahan, and Edwin Harpole. Active Pallbearers will be Gary Shannahan, Gary Dolbeare, David Dolbeare, Roger Norton, Wayne Clark, Rex Clark, and Dan Dolbeare. Memorials may be given to Pike County Home Care and Hospice or the Rotary Scholarship fund in care of Collier Funeral Home, 117 Barnard Drive, Louisiana, Missouri 63353. Online condolences may be sent at www.collierfuneral.com.

Raymond Eugene Dolbeare passed from this earth Sunday morning, October 25, 2015, at his home in Louisiana, MO, surrounded by his loving family. Ray was 89 years, 11 months, and 5 days old. Funeral services will be held at 10:00 A.M. on Wednesday,... View Obituary & Service Information

The family of Raymond E. Dolbeare created this Life Tributes page to make it easy to share your memories.

Send flowers to the Dolbeare family.