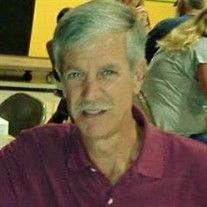 Randall Eugene Woodall, 58, of Louisiana died at his home Sunday, Dec. 3, 2017. Friends and family are invited to services, which will be held at Collier Funeral Home in Louisiana. Visitation will be held at 4:00 P.M. until 8:00 P.M. Wednesday December 6th and Funeral Services 11:00 A.M. on Thursday, December 7, 2017. Rev. Stan Henderson will officiate. Burial Services will follow service procession to Greenwood Cemetery in Clarksville. Randy was born March 26, 1959, in Sedalia, Missouri to Arnold “Curly” Woodall and Betty Lee (Means) Woodall. He was married to Debra Jean (Wills) Woodall on Jan. 2, 1979. Survivors include his wife, Debra Woodall of Louisiana, four children, Richard Lortz of Blue Springs, Jason Woodall Marshall, Michael Woodall and wife Crystal of Lorton, VA, and Ramsey Dickerman and husband Jason of Vandalia; three brothers, Mike Hansen, Ron Hansen and wife Susan, and Darrin Woodall and wife Debbie, and sister Connie Hughs and husband Dean; six grandchildren, Reeve, Payton, Marshall, Rayne, Sebastian, Serenity, and Robert; and several nieces and nephews. He is preceded in death by his parents “Curly” and Betty, as well as his sister, Dorothy Summers. Randy had worked at Hercules/Ashland for more than twenty years and was currently serving as a Corrections Officer at the Northeast Correctional Center in Bowling Green. He loved spending time with his family; especially his grandchildren. He enjoyed serving the local community in many capacities. Most notably - within the Clarksville Khoury League or within the church. Famous for his smile, jokes and backyard BBQ, Randy loved to entertain friends and family at their lake home in Louisiana. He loved taking his wife dancing and on their many Harley road trips through the years. He was a hard worker who always had a project in the making. Pallbearers will be Mike Blankenship, Dylan Woodall, Derek Woodall, Stan Hageman, Marshall Suddarth, and Dave Sipple. Memorials may be given to the Cowboy Church Building Fund, c/o Collier Funeral Homes, Inc., 117 Barnard Drive, Louisiana, MO 63353.

Randall Eugene Woodall, 58, of Louisiana died at his home Sunday, Dec. 3, 2017. Friends and family are invited to services, which will be held at Collier Funeral Home in Louisiana. Visitation will be held at 4:00 P.M. until 8:00 P.M. Wednesday... View Obituary & Service Information

The family of Randall E. Woodall created this Life Tributes page to make it easy to share your memories.

Randall Eugene Woodall, 58, of Louisiana died at his home Sunday,...

Send flowers to the Woodall family.