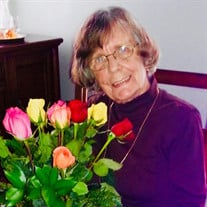 Patsy I. Ross Rule Holliday died Saturday morning, March 2, 2019 in St. Francis Hospital in Monroe, La. She was one day and one-month shy of her 85th birthday. Her daughters Mary Gail Elizondo of Green River, Wyo., and Cathy Kasbaum of Oklahoma City were at her bedside, the end of a two-day vigil. She suffered from an inherited progressive lung disorder that steadily curtailed her oxygen intake. Patsy did not go gentle into that good night. She stubbornly resisted her fate over the years. In lieu of a memorial service, the family requests a brief prayer upon learning of Patsy’s passing. Graveside services will be 11:00 A.M. Saturday, June 8, 2019 at Fairview Cemetery 6 miles northwest of Louisiana, MO. near Grassy Creek. Patsy’s early life began in Dickensian fashion. When she was, 2. and brother, Archie, 5, her father came home to find the two youngsters sitting on the floor. His wife had left. The young woman was unable to cope with motherhood and grim days of the Great Depression. The father’s kindly, competent mother, Irene Clarkson, raised them. She was a fun-loving woman of many talents, including gardening, cooking and sewing. She told Patsy to always respect her mother. When Patsy spoke of “Grammaw” Clarkson, it was in reverent tones. Patsy grew up in the small Mississippi River town of Louisiana, MO. She fondly remembers playing with neighborhood children in each other’s yards, even after dark. Her playmates included daughters of a former Missouri Governor. She swam in the area’s creeks in summer and ice-skated on them in winter. Patsy’s work ethic began early. She and brother Archie went door-to-door on Saturdays delivering show bills for the town’s movie theater when she was 6. During her high school years, she worked as a soda jerk at a drugstore in her high school days. Patsy loved high school, but her stepfather told her it was time she left home and earned a living at the start of her senior year. Patsy had nowhere to go. Her 1950s-style steady boyfriend, Tom Rule, gallantly offered his hand in marriage. Tom worked for his father, Griff Rule, a large landowner. A year-and-a-half later she gave birth to Mary Gail. Several months later, Tom’s parents were killed in a head-on collision when a car veered into their lane. The large holdings were divided among several children. Tom rented some ground. Patsy became a country girl, living in a house with a pump and heated with wood. Patsy and Tom began raising their family of three girls. Economics of small farming caught up with them. Tom and Patsy moved to town after Tom began working for the Missouri Highway Department. Patsy worked at a bakery, arising at 4 a.m. and returning home to tend to her house and daughters. Patsy and Tom saw to it their daughters had the same happy childhood as they did. They took the girls on annual vacations to the Lake of the Ozarks. The bakery closed, but Patsy quickly found work at a pharmacy. Meanwhile, Tom and Patsy enjoyed their grandchildren, hunting, fishing, and outings in a national park along the Mississippi River. Tom, beset by a weak heart, retired from the highway department. He died a few years later. A support group rallied around Patsy. They enjoyed traveling, dinners, and yard sales – both selling and buying. Patsy’s home was a haven for the grandchildren to enjoy after-school snacks. The boys were cautioned they must always clean up their mess. Patsy and Ed Holliday, now a newspaper editor of Monroe, LA, became reacquainted at their 46th high school reunion. The next thing he knew Ed was asking for Patsy’s hand in marriage. She agreed and moved to Monroe, a bold move for a small-town lady. The next 21 years were bliss. Patsy and Ed enjoyed senior-citizen trips, estate sales until they ran out of room to put stuff, and a cruise. After Ed taught Patsy how to keep score, she never missed a St. Louis Cardinals baseball game. She was also a fan of Mizzou football and basketball and the New Orleans Saints. She also enjoyed TV cooking shows: The Pioneer Woman and The Kitchen. Also predeceased is daughter, Sue Ann Rule Murry. Other survivors include husband Edwin Holliday of the home, Sister Penny Hoke and late husband Bob of Norman OK., daughters, Mary Gail Elizondo, husband Jerry of Green River, WY, and Cathy Jo Kasbaum and husband, Greg, of Oklahoma City, OK. Five grandchildren, Christy and husband Ken Simmons, of Conroe, TX, Seth Murry, of Normangee, TX, Nathan Murry and wife, Brittney of Louisiana, MO, Carrie Moseley of McAlester, OK, PFC Thomas Moseley USMC of Tulsa, OK. and five beloved great-grandchildren. The family expresses deep gratitude for the friendliness, kindness and competence of St. Francis employees ranging from the guards at the door to the medical personnel. A special thanks goes to Dr. Ronald Hubbard and his staff at St. Francis Health Clinic.

The family of Patsy I. Ross Rule Holliday created this Life Tributes page to make it easy to share your memories.