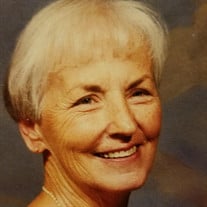 Mrs. Patricia D. Gross, 86, of Louisiana, Missouri formerly of Worton, Maryland passed away Wednesday, April 5, 2017 at Lynn’s Heritage House in Louisiana, M0. Her desire was to be cremated. Memorial services will be held at a later date. She was born August 21, 1930 in Philadelphia, PA. the daughter of Grant and Delma Boston Dinmore. She married A. William Gross, Jr. September 6, 1951 at the Glenolden Presbyterian Church in Glenolden, Pennsylvania. He preceded her in death March 21, 1999. She is survived by one son; A. William Gross III (Margie) of Hammonton, NJ, two daughters, Patricia Elizabeth Klotzbach (Fred) of Avondale PA, and Rebecca Ann Penrod (Joe) of Louisiana, M0, One sister; Geraldine Ingram (Al) of St. Petersburg Beach, Florida, one brother, Grant C. Dinmore, Jr (Judy) of Cape Elizabeth, Maine, 5 grandchildren; Joseph William Penrod of Louisiana, M0, Tonya Sheppard (Shep) of Louisiana, M0, Megan Penrod (Jeremy) of Troy, M0, Kelsey Gray (Will) of Woodbury, New Jersey, Erin Klotzbach (Meghan) of West Grove, PA, 12 great-grandchildren, and special nieces and nephews. She was preceded in death by her parents; Grant and Delma Boston Dinmore. She graduated from the Glen-Nor High School in 1948. After high school she attended the Nursing School at the Pennsylvania Hospital in Philadelphia, PA where she received her RN Degree in 1951. She had a long and rewarding career in Nursing and had been employed at a number of hospitals as an RN in Pennsylvania. After coming to Missouri she taught Nursing at the Lincoln-Pike Vocational School at Eolia, M0. After retirement she and her husband moved to Chesapeake Bay, Maryland where she pursued her love of Sailing. She was also an avid Artist and a member of the Chestertown Art League. She was a member of the Chestertown Emmanuel Church. Memorials may be given to Alzheimer’s Association or to the First Presbyterian Church in Louisiana, Missouri in care of Collier Funeral Homes, Inc., 117 Barnard Dr., Louisiana, M0 63353

Mrs. Patricia D. Gross, 86, of Louisiana, Missouri formerly of Worton, Maryland passed away Wednesday, April 5, 2017 at Lynn&#8217;s Heritage House in Louisiana, M0. Her desire was to be cremated. Memorial services will be held at a later date. She... View Obituary & Service Information

The family of Patricia D. Gross created this Life Tributes page to make it easy to share your memories.

Send flowers to the Gross family.