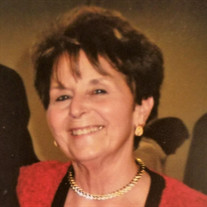 Pat Radford, age 73, of Louisiana, passed away Monday, February 12, 2018 at the St. Luke’s Hospital in Chesterfield. Funeral services will be held at 10:00am on Saturday, February 17, 2018 at the First Baptist Church in Louisiana with Rev. Terry Cook officiating. Burial will be held in the Fairview Cemetery in Louisiana. Visitation will be held from 4:00pm until 7:30pm on Friday at the Collier Funeral Home in Louisiana. Pat was born July 19, 1944 in Louisiana, the daughter of William Rhen and Mary Marie Love Copher. She married Donald Joe Radford December 31, 1974 at Elmwood Presbyterian Church. He survives. Other survivors include sons Kelly Henderson (Elaine) of Louisiana, Patrick Radford (Becky) of Centralia and Cory Radford (Tiffany) of Wentzville; grandchildren Brandon Henderson (Rachel), Kelsey Henderson, Cameron Henderson, Miranda Radford, Breanna Radford, Isaac Radford, Tatum Radford, Gabrielle Radford and Drew Radford; sister Phyllis Calvin (Jim) of Louisiana; numerous nieces, nephews and cousins. She was preceded in death by her parents. Pat was born and raised in Louisiana, graduating from Louisiana High School in 1962 with honors and continued to serve her class as the reunion coordinator. After raising her children, she graduated from Hannibal Lagrange College with an Associates Degree in Early Childhood Education. Pat was a woman of faith, attending the Elmwood Church. During her working career Pat was an administrative assistant at Missouri Edison, a water office manager, worked Stark Brothers and Center Line. Her love for children lead her to a career with head start, as a Parents As Teachers educator and a mentor through the YMCA. Pat enjoyed attending shows at the Wagon Wheel Opry in Frankford, as well as traveling to Branson. She was a devout St. Louis Cardinals and Louisiana Bulldogs fan and supporter. Serving as pallbearers will be Lance Calvin, Joe Calvin, Jerod Calvin, Jason Calvin, Junior Love and Thad Radford. Memorials may be made to the Twin Pike Family YMCA, Headstart or the Bulldog Boosters.

Pat Radford, age 73, of Louisiana, passed away Monday, February 12, 2018 at the St. Luke&#8217;s Hospital in Chesterfield. Funeral services will be held at 10:00am on Saturday, February 17, 2018 at the First Baptist Church in Louisiana with... View Obituary & Service Information

The family of Pat Radford created this Life Tributes page to make it easy to share your memories.

Send flowers to the Radford family.