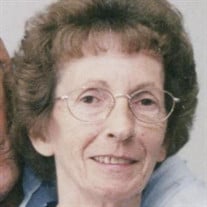 Nora Louise Wilson, 80, Escanaba, MI, formerly of Clarksville, MO, born March 26, 1941, went home to be with the Lord, January 19, 2022. She was the 5th child of Ray and Elva (Robison) Ziegler of Clarksville, MO. After graduating from Clopton High School, she married William G. Wilson, Jr. After Bill (AKA, Jr) rejoined the Army, they were stationed in Alaska, Virginia, Colorado and Germany. They settled in Colorado Springs, CO. Once Bill retired from the military, he started working for the Colorado Department of Corrections. During this time, they raised 3 children, James, Mary and Jessica. They eventually retired in MO, near her parents. She rejoined her family church, Mary Queen of Peace, Catholic Church. When Bill passed away, she moved to Escanaba, MI, where she lived with her son, James, and daughter-in-law, Amy. She enjoyed reading and completing Sudoku puzzles. She especially loved spending time with her grandchildren playing the rousing card game of “golf”. She is survived by her sister Karen Heuer of Titusville, FL, 3 children, 5 grandchildren and 8 great-grandchildren. Son James: grandsons Mike and William, granddaughter Lisa (grandchildren Sophie, Emma, Cecelia and Theodore), granddaughter Annemarie (grandchildren Gideon and Charles). Daughter Mary. Daughter Jessica; granddaughter Nikki, (great-grandchildren: Desirae and Arianna). She was preceded in death by her parents, her husband William, her brothers, Bill, Larry, Bobby Joe, and her sister, Annamarie. A Funeral Mass will be held at 10:00 A.M. on Saturday, April 23, 2022 at the Mary Queen of Peace Catholic Church in Clarksville, MO. Burial will follow at the Greenwood Cemetery in Clarksville, MO. Collier Funeral Homes, Inc. in charge of local arrangements.

Nora Louise Wilson, 80, Escanaba, MI, formerly of Clarksville, MO, born March 26, 1941, went home to be with the Lord, January 19, 2022. She was the 5th child of Ray and Elva (Robison) Ziegler of Clarksville, MO. After graduating... View Obituary & Service Information

The family of Nora Wilson created this Life Tributes page to make it easy to share your memories.

Send flowers to the Wilson family.