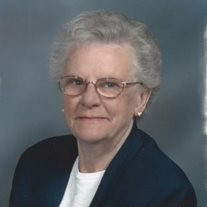 Mrs. Nina Lawrence Holland, 86, of Louisiana, Missouri passed away Sunday, March 9, 2014 at the Maple Grove Lodge Nursing Home in Louisiana. Graveside services will be held at 1:00 p.m. Thursday, March 13, 2014 at the Jordan—Buffalo Cemetery with visitation from 11:00 a.m. until 1:00 p.m. at the Collier Funeral Home prior to the service. She was born May 3, 1927 at Rockport, Illinois the daughter of Rollie Wilson and Nerva Simms Wilson. She married James (Bill) Lawrence in May of 1945. They later moved to Louisiana, Missouri to make their home. He preceded her in death. She married Glenn Neal Holland September 30, 1978 and he preceded her in death. She is survived by one son; John R. Lawrence (Lou Ann) of Moscow Mills, Missouri, one daughter; Sherre Ince (David) of White Hall, Illinois, two step-daughters; Kellee Garska of Portland, Oregon and Shannon Steele of the State of California, 5 grandchildren and 10 great grandchildren. She was preceded in death by her parents, Rollie and Nerva Wilson, two sons who died at birth and two sisters, Fern Thompson and Florence Utech and other family relatives. She graduated from the Pleasant Hill High School in Pleasant Hill, Illinois in 1945. She had been employed as a Cook in the Louisiana School District for many years before retiring. She was a member of the St. Joseph Catholic Church in Louisiana, Missouri. Memorials may be given to the Alzheimers Association, St. Jude Childrens Association or the St. Joseph Catholic Church in care of Collier Funeral Homes, Inc., 117 Barnard Dr., Louisiana, M0 63353. Online condolences may be sent to collierfuneral.com

The family of Nina Mae Holland created this Life Tributes page to make it easy to share your memories.

Send flowers to the Holland family.