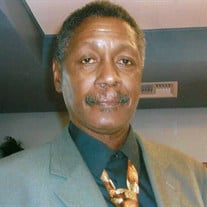 Mr. Murvin Ivey, 69, of Louisiana MO, was called home on November 24th 2019 at Pike County Memorial Hospital in Louisiana, MO with family by his side. Funeral services will be held at 2:00 P.M. on Monday, December 2, 2019 at the First Presbyterian Church in Louisiana, MO. The Rev. Lonnie Parker and Elder Barbara Lee will officiate. Visitation will be from 12:00 P.M. until time of service Monday at the church. Mr. Ivey was born June 7, 1950 in Marianna, Arkansas to Jesse Ivey and Darthy Britt Ivey Wilson. After 19 years together, Murvin married his best friend Izola Burse on March 19, 1994 in Louisiana, Missouri. She survives. Other survivors include his daughters; Chandria Norman (Ed), Renee Davis (Carlos) of Hannibal, Pamela Lynn (John), Alicia Blackwell (Leroy) of Louisiana, and Yolanda Ivey of Peoria; sons, Kevin Guyton, Sean Ivey (Angel) of Hannibal, Marvin Burse (Heather), Mark Burse of Louisiana, Derrick White (Nicole) of Arkansas, Steve Williams Sr. of Peoria; sisters, Barbara Nelson and Darthy Stout (Eric); brothers, Rubin Ivey, James Ivey, and Cedric Ivey; 40 grandchildren, 32 great-grandchildren, a foster child, Cynthia Campbell of Louisiana, a long-time friend, Sally Hunt, and a host of other family and friends. He was preceded in death by his parents, a daughter, Michelle Ivey, a sister, Fannie Minor, 2 nephews, Adrian Ivey and Elton Ivey, Sr., and 4 grandchildren, Domonique Powell, Kevin Ivey, Secara Burse, and Joseph Ryan Guyton. Murvin was a veteran serving in the United States Marine Corps. He earned the title of becoming a Marine Semper Fi. Murvin later worked as a truck driver for many local businesses, including Transwood and Midwest Grain. Mr. Ivey was a Baptist by faith. He enjoyed being on the river in his boat fishing, he could make a day of it. He was always watching football, country western and soap operas, and also loved a good card game with family and friends. His greatest joy was being around and having a house full of grandkids and great-grandkids. He was well known as a great man, always there for his family and friends. He will be greatly missed by all. Collier Funeral Home in Louisiana in charge of arrangements. Memorials may be sent to the family in care of the funeral home.

Mr. Murvin Ivey, 69, of Louisiana MO, was called home on November 24th 2019 at Pike County Memorial Hospital in Louisiana, MO with family by his side. Funeral services will be held at 2:00 P.M. on Monday, December 2, 2019 at the First Presbyterian... View Obituary & Service Information

The family of Murvin L. Ivey created this Life Tributes page to make it easy to share your memories.

Send flowers to the Ivey family.