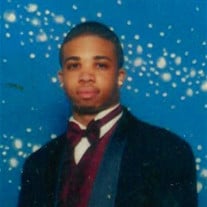 Michael Quentin Alexander, 36, went home to be with the Lord on February 10, 2015 in University City, Missouri. Funeral services will be held at 11:00 A.M. Monday, February 16, 2015 at the Collier Funeral Home in Louisiana, Missouri. The Rev. Marvin Davis will officiate. Burial will be at the Mt. Ayre Cemetery near Edgewood, Missouri. Visitation will be held from 10:30 A.M. until time of service at 11:00 A.M. Monday at the funeral home. He was born on April 10, 1978 in Grand Rapids, Michigan, the son of Curd C. and Kathleen Rudd Alexander. He accepted Christ and became a member of Community Bible Baptist Church in Grand Rapids. He attended Grand Rapids Christian Schools, Grand Rapids Public Schools, and graduated from Ottawa Hills High School in 1996. Michael participated in wrestling and track while there. He attended a year at Grand Rapids Community College. Michael is survived by his parents, Kathleen Alexander of Grand Rapids, Michigan/Jennings, Missouri, and Curd Alexander of Kalamazoo, Michigan. He also leaves his maternal grandmother, Anna Rudd of Eolia, Missouri/Jennings, Missouri, and survived by several Aunts, Uncles, many Cousins and other relatives, a special friend, Reagan Irwin, and a host of friends. He will be missed. Michael was an avid reader, a talented writer, a gatherer of knowledge, and fount of information. He was a delight to know, hilariously funny and with the most infectious laugh. The heavens are resounding with his laughter. Michael, You brought joy and humor to our ordinary lives. You gave to others in a special way expecting nothing in return. You’ll be missed each and every moment of every day. Honorary Pallbearers will be Robert Nailon III, Albert Rhodes, and Micah Sanders. Active Pallbearers will be Charles W. Rudd Jr., Henry Tucker, Bryan Tucker, William Smith, Oscar Neal, and Charles Bryant Jr. Memorial donations may be given to the donor’s choice in care of Collier Funeral Homes, Inc., 117 Barnard Drive, Louisiana, Missouri 63353. On-line condolences may be sent at www.collierfuneral.com.

Michael Quentin Alexander, 36, went home to be with the Lord on February 10, 2015 in University City, Missouri. Funeral services will be held at 11:00 A.M. Monday, February 16, 2015 at the Collier Funeral Home in Louisiana, Missouri. The Rev.... View Obituary & Service Information

The family of Michael Quentin Alexander created this Life Tributes page to make it easy to share your memories.

Michael Quentin Alexander, 36, went home to be with the Lord...

Send flowers to the Alexander family.