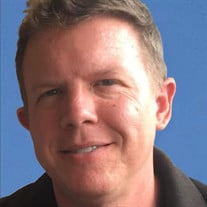 Matthew Allen Taylor, age 41, died on May 11, 2020 in La Selva Beach, CA. Matthew was born on July 11, 1978 in Louisiana, Missouri. He graduated from Clopton High School in 1996 and joined the United States Airforce, where he worked as an Intelligence Analyst from 1998-2002. Matthew received a BS in Computer Information Systems from DeVry University in 2006. After his discharge from the Airforce, Matthew married his high school sweetheart Trinity Carnahan on October 13, 2002. They have 2 children, Dean (15) and Romy (12). Matthew worked for many prominent companies over the course of his impressive career, including SAIC, Tripos, OCI, and G2-1. In 2010, he moved his family to Cupertino, CA to work for Yahoo. In 2012, Matthew started his dream job at Numenta, where he spent 8 years building, managing and educating communities about neuroscience and machine intelligence. His influence and contributions in that space were significant and wide- reaching, and his presence and voice will be deeply missed. Matthew poured passion into everything he did and had a knack for bringing people together. Whether he was DJing for a local radio show on the weekends, live-streaming from his office, or engaging with fellow artists online as he began to explore a new means of expression, Matthew was fearlessly creative and endlessly welcoming. For all of his passions and the many hats he wore, none meant more to him than his most prized role of husband and father. His family will always love and remember him for the devoted, adventurous, fun-loving dad and husband that he was. Matthew is survived by his wife, Trinity, children Dean and Romy; his parents Jay Taylor, Kristy Sisco (Doug), Norm Bennett (Lisa); his sisters Nicole Silva (Dan), Kelsey Allen (Stephone), Jessie Howard (Brad); his brothers Brock Sisco (Bridget), Jeremey Bennett, Jordan Bennett; his grandparents Verna Kent, Juanita Orr. He was preceded in death by his grandparents Lewis Kent, Ralph Taylor, Nancy Taylor, Gale Bennett, Marilyn Coleman, Mary Oliver, Martha Pope; his cousin Kylar Kent. A visitation will be held from 10:00 A.M. until 1:00 P.M. on Saturday, May 23, 2020 at the Collier Funeral Home in Louisiana, MO. Due to Covid-19 restrictions, social distancing will be implemented. Memorials may be made to Trinity Taylor for the Dean and Romy Taylor Education Fund in care of the funeral home.

Matthew Allen Taylor, age 41, died on May 11, 2020 in La Selva Beach, CA. Matthew was born on July 11, 1978 in Louisiana, Missouri. He graduated from Clopton High School in 1996 and joined the United States Airforce, where he worked as an... View Obituary & Service Information

The family of Matthew Allen Taylor created this Life Tributes page to make it easy to share your memories.

Send flowers to the Taylor family.