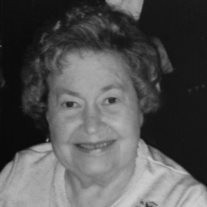 Mary Alice Jaeger Middleton went to be with the Lord on February 19, 2014 following a brief illness in Pike County Memorial Hospital, Louisiana, Mo. Visitation will be held from 4:00 to 7:00 p.m. Friday, February 28 at Collier Funeral Home in Louisiana, Missouri. Funeral services are scheduled for Saturday, March 1 at 2:00 pm at the First Presbyterian Church in Louisiana with interment to follow at the Bowling Green Cemetery. A lifelong resident of Pike County, Mary Alice was born on December 7, 1926 in rural Clarksville to John Joseph and Mary Mackey Jaeger. She was educated in the Clarksville Public Schools, later returning as a young adult to teach fourth grade there for several years. She attended William Woods College, Fulton, Mo graduating in 1946. While at William Woods, she attended Winston Churchill's famous "Iron Curtain Speech" at Westminster College as a journalist for the Louisiana Press Journal. She continued her education at the University of Missouri in Columbia, graduating in 1948. While at "Mizzou", she was a member of the Delta Delta Delta social sorority and remained an avid Tiger fan throughout her life. On June 17, 1951, she was united in marriage to Dr. John W. Middleton of Bowling Green and a 1951 graduate of Temple University Medical School in Philadelphia, Pa. After a short practice in Carthage, Ill, the newlyweds felt compelled to return to Pike County; moving to Louisiana in 1953 where Dr. Middleton established a medical practice which survives as the Pike Medical Clinic today. Mary Alice was a member of the First Presbyterian Church where she served in many church activities. She was a willing volunteer for grade school, high school, and PTA activities and Cub/Boy Scout programs. She was also a long time member of the DAR and always loved boating on the Mississippi River with her family and friends. She is survived by her husband and their four children, John (wife, Peggy) of Springfield, Missouri, Alice (husband, Jay) Holtzhouser of Robinson, Illinois, Joe Middleton of Independence, Missouri, and Tom Middleton of Louisville, Kentucky. She is also survived by grandchildren Amanda, Kate, and Patsy Middleton, Emily and Jason Holtzhouser, Mackey and Jacob Price (J.P.) Middleton, and numerous nieces, nephews, and friends. She was preceded in death by her parents and only brother, Tom Jaeger and his wife JoAnne Holtsford Jaeger of Clarksville, Mo. A forty two year survivor of Multiple Sclerosis, Mary Alice always greeted life with a smile on her face and a "thank you" to all she encountered. To the end, she was proud of her Pike County heritage and Clarksville beginnings. Honorary Pallbearers will be Asa Jaeger, Robert Wahl, Joe Shifman, and Phillip Pitney, MD. Active Pallbearers will be Mackey Middleton, Jacob Price “J.P.” Middleton, Jason Holtzhouser, Bill Wahl, Tom Jaeger, and Bruce McKenna. Memorials may be made to the First Presbyterian Church, 121 S 8th St, Louisiana, Mo. 63353.

Mary Alice Jaeger Middleton went to be with the Lord on February 19, 2014 following a brief illness in Pike County Memorial Hospital, Louisiana, Mo. Visitation will be held from 4:00 to 7:00 p.m. Friday, February 28 at Collier Funeral Home in... View Obituary & Service Information

The family of Mary Alice Jaeger Middleton created this Life Tributes page to make it easy to share your memories.

Mary Alice Jaeger Middleton went to be with the Lord on February...

Send flowers to the Middleton family.