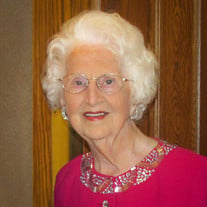 Mary Ann Heaven Littrell, age 93, of Louisiana, Missouri passed away peacefully September 25, 2018 at Lynn’s Heritage House surrounded by friends and family. She was born December 3, 1924, in St. Louis, MO, the daughter of the late Charles and Katherine (Mary) Heaven. Mary was a 1943 graduate of St. John the Baptist High School, in St. Louis, MO. She was united in marriage to Carl Ess Littrell, December 1, 1945 in St. Louis. Carl and Mary relocated to Louisiana, MO in 1953. Carl preceded her in death, September 10, 1999. Mary worked in the Louisiana Best Rexall store for several years where her husband was a co-owner. She was later employed by Missouri Edison (Ameren) where she retired as a Regional Clerk after 23 years. Survivors include four children, Carl (Jane) of South Bend, IN; John ‘Jack’ (Lisa) of Lee’s Summit, MO; Pat (Jim Biggerstaff) of Jefferson City, MO and Robert (Mary Lou) of Washington, MO; ten grandchildren, eighteen great-grandchildren, and several nieces and nephews. Mary was a guiding light in her community and St. Joseph Church. She volunteered for the Louisiana Chamber of Commerce, History Museum, Clothing Room, Bulldog Boosters, Raintree Arts, Friends of the Library, Housing Authority, and the Hospital Auxiliary. Mary not only volunteered but was a dynamic worker who took ownership of the projects of these organizations. She was a member of Red Hatters and, was a charter member of the Elkettes. Mary served as president of the St. Joseph Church Altar Sodality and was a Communion Minister for many years and was awarded the Woman of Faith of the Community in 1999. She was especially proud of her Louisiana Rotary membership in which she served as president and received the Rotarian of the year award in 1996-97, and the Lifetime Service Award in 2017. A Mass of Christian burial will be celebrated at 11am Saturday, September 29, 2018 at St. Joseph’s Catholic Church, 508 North Third St. Louisiana, MO 63353. Interment at St. Joseph Catholic Cemetery following the services. Visitation will be held at Collier Funeral Home, 117 Barnard Dr., Louisiana, MO 63353, 6-8pm, Friday, September 28th with a prayer service at 7:30pm. Visitation will continue prior to the funeral mass from 9:30–10:30 at Collier Funeral Home on Saturday. In lieu of flowers, memorials are suggested to Village of the Blue Rose, 12533 Highway 79, Clarksville, MO 63336, St. Joseph’s Catholic Church, or the Louisiana Rotary’s Sunset Park pavilion project.

The family of Mary Ann Littrell created this Life Tributes page to make it easy to share your memories.

Send flowers to the Littrell family.