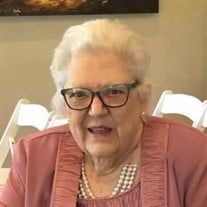 Mary Ellen Dillender Griffith peacefully passed away February 9, 2022. Funeral services will be held at 2:30 P.M. Sunday, February 13, 2022 at the Collier Funeral Home in Louisiana, MO. Chris Gamm officiating. Burial will be at the Jordan-Buffalo Cemetery near Louisiana, MO. Visitation will be from 1:00 P.M. until time of service Sunday at the funeral home. She was born August 26, 1927 to Milton Stephen Dillender and Ruth Sanderson Dillender in Louisiana, MO. After graduation from Louisiana High School she attended Saint Luke’s Nursing School in St. Louis. In 1948 she married William Edward Griffith, Sr. She worked as a Registered Nurse for many years at Pike County Hospital and spent several years teaching at the Pike County Vocational School in Eolia, MO. She was a long time member of Calumet Presbyterian Church. She lived in the Louisiana area until age 91 when she moved to Blue Springs, MO to be closer to her son and his family. She became an integral member of the community at the Parkway Independent Living Center and attended Chapel Hill Presbyterian Church. She is survived by her son, Steve Griffith and his wife and dear Daughter in Law, Nora, and her sister Gina Dean of Sedalia, seven grandchildren: Kirsten LaBarge (Larry), Keven Griffith (Frannie), Carrie Griffith, Zachary Griffith (Kristi), Laura Griffith, Caroline Griffith, and Rebecca Griffith Miller (Reed); seven great-grandchildren: Dillon LaBarge, Hunter LaBarge, Hayden LaBarge, Madison Griffith, Finlee Griffith, Livingston Griffith, and Jaxine Griffith, and one great-great grandchild, Dylan Strate; and many nieces, nephews, and cousins. She was preceded in death by her parents, her husband, her son William Edward Griffith, Jr., her grandson William Edward Griffith, III, and her sister, Betty Dillender Gaunt. Mary Ellen was a remarkable woman. She was a servant to many as a nurse and educator. She served on the Board of Louisiana Housing Association and was awarded the Women of Faith in the Community Award for her service. She loved spending time with her grandchildren, playing cards (especially pinochle), cooking, knitting, nutcrackers, all things Christmas, watching the St. Louis Cardinals play baseball, watching figures skating, and visiting with family and friends. She touched many lives and was touched in return. She was generous, loving, had a great sense of humor, and was so resilient, overcoming many hardships. She enjoyed the love of many, many people, and will be missed by all. She asked that donations be directed to Pike Pioneer Nutritional Center.

The family of Mary Ellen Griffith created this Life Tributes page to make it easy to share your memories.