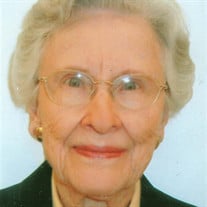 Mary Alice Woodward Logan passed away peacefully on November 18, 2019 at Lynn’s Heritage House in Louisiana, Missouri with her sons at her bedside. Visitation will be held at the Collier Funeral Home in Louisiana, Missouri from 1:00 P.M. to 3:00 P.M. on Wednesday, November 20th with the funeral service at 3:00 P.M. Interment will follow at Riverview Cemetery in Louisiana. Mary Alice was born in Atlanta, Georgia on July 29, 1921 to Mordicai Levi (M.L.) Woodward and Eliza Ward Morton Woodward. She was raised in Miami Beach, Florida. After graduating from Miami Beach High School, she attended Walsh School of Business Science, worked six years as a customer service representative for Southern Bell Telephone, and flew as a stewardess for Pan American World Airways for a year on Latin American routes. On June 2, 1947 she was united in marriage to John Logan of Hannibal, Missouri. After their honeymoon, they moved to Louisiana, Missouri. where they resided and raised their family. Mary Alice was a member of the First Presbyterian Church, a 70-year member of GH Chapter of P.E.O. serving many years as corresponding secretary, a Cub Scout den leader, active in PTA, a director on the Pike County, Missouri American Red Cross board, and fundraised for the Pike County Country Club swimming pool. She shared her husband’s love of University of Missouri football and boating on the Mississippi River with family and friends. She also enjoyed genealogy, coin and stamp collecting, and playing bridge which she did until 2017. She is survived by a brother George M. Woodward of Plantation, Florida and two sons, Clay S. Logan (Sally) and Walter C. Logan II (Cindy), all of Louisiana, Missouri. She is also survived by four grandchildren Benjamin J. Logan of Louisiana, Missouri, Bethany Pope (Steve) of Fenton, Missouri, John S. Logan (Kristen) of St. Louis, Missouri, and M. Blake Logan of Columbia, Missouri and four great-grandchildren, Jack W. Logan, Logan A. and Gwenyth A. Pope, and William S. Logan. A niece, Elizabeth M. Sedlak (Sean Cunningham), of Encino, California and a nephew, Robert J. Sedlak, Jr. (Maria), of Fountain Valley, California and a great-niece and two great-nephews also survive. She was preceded in death by her parents, an infant son, her husband, and sister, Nancy W. Sedlak-Ellis. Honorary pallbearers will be Charles R. Lewellen and Dr. Philip Pitney. Active pallbearers will be Mark Haddock, Benjamin Logan, John S. Logan, M. Blake Logan, Steve Pope and Mark Shade. Memorials may be made to the First Presbyterian Church or the donor’s choice.

The family of Mary Alice Logan created this Life Tributes page to make it easy to share your memories.

Send flowers to the Logan family.