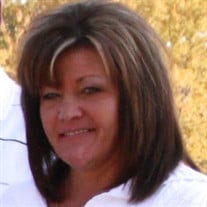 Mrs. Marilyn D. Sapp, 51, of Louisiana, Missouri, passed away suddenly June 11, 2015. Visitation will be held on Monday, June 15th from 10:00 a.m. until 2:00 p.m. with funeral services to follow at 2:00 p.m. at the Collier Funeral Home in Louisiana, Missouri. The Rev. Randall Cone will officiate. Burial will follow at Riverview Cemetery in Louisiana. Marilyn was born February 25, 1964 in Louisiana, Missouri to Willard Glen Dempsey and Pat and Nick Quattrocchi of Louisiana. She was also the daughter of Dora and the Late Errett “Bud” Sapp of Louisiana. Marilyn leaves behind her husband of 33 years and one daughter. She was married to Virgil “Buddy” Sapp on June 12, 1982. Together they had one daughter, Erica Ann (Sapp) Hill and son in-law Josh Hill. She also left behind two grandchildren, Kailyr “Kai” Errett Hill (2) and Dawsyn Eliza Hill (11 months). Marilyn took great pride in everything she did. She was a hardworking, devoted, and loving wife, mother, nana, aunt, and friend. She was employed by Walmart for 35 years. Marilyn enjoyed spending time with family, being outdoors, watching the sun rises and set over the river, and most recently building her dream home alongside Buddy. She loved life and was known for her laugh and easy-to-get-along with personality, she had no enemies. For family she would even be referred to as the “Peacekeeper”. She is survived by her parents, Willard Glen Dempsey, Nick and Pat Quattrocchi, and Dora Sapp, one grandparent Mary Gillert, and siblings, Glen Dempsey, Doug Dempsey, Mary Sapp, Robert Sapp, and many other family members. Marilyn was preceded in death by her father-in-law Errett “Bud” Sapp, J.R. Sapp, her paternal grandparents, and maternal grandfather. Pallbearers will be Robert Sapp, Myles Neff, Randy Malcom, Josh Sapp, John Sapp, Kaleb Rosenstengle, A.J. Cullom, and Ryan Griffin.

The family of Marilyn D. Sapp created this Life Tributes page to make it easy to share your memories.

Send flowers to the Sapp family.