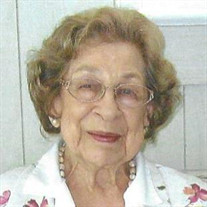 Marilyn Crow, 93, passed away at her home in Clarksville on March 21, 2015. She was born in Hannibal, Missouri on June 26, 1921 to Kenneth and Margaret Romberg Scott. She graduated from Hannibal High School and married Walter Crow in May 1938. He preceded her in death in October 1999. Walter & Marilyn moved to Clarksville in 1947 and she had continued to live in their home for 68 years. They owned Crow’s Rexall Drug Store and were involved in many community, school and Methodist Church activities. Teenagers and adults are reminded of how kind they were to everyone and willing to lend a helping hand by spreading “Seeds of Kindness”. Friends and family have commented of what an inspiration Marilyn was with her “Sunny” outlook on life and her genuine smile warmed their hearts. Marilyn is survived by a daughter, Sherry Rae McCarty (Don) and a son Randy Crow. She was called Muns by her grandchildren, Mandy McCarty Spillar (Bill), Julie McCarty Vogel (Jeff) , Brad McCarty (Deanna), Trampes Crow and Trish Crow Barker (Chris). They have fond memories of vacations and sleep-overs with her famous fried chicken, vegetable soup and ice cream sundaes. She also had 11 great-grandchildren that enjoyed her company. A Celebration of Marilyn’s life will be held on Friday, March 27, 2015 at the Collier Funeral Home in Louisiana, Missouri with visitation at 12:00 until time of service at 2:00 p.m. Pastor Art Moore will officiate and burial will be in the Greenwood Cemetery in Clarksville. Pallbearers are; Trampes Crow, Brad McCarty, Rod Crow, Bill Spillar, Jeff Vogel, Brandon Spillar, Tyler Vogel, Harrison Warden, Evan Warden and Jim Gott. Suggested memorials may be made to Clarksville Methodist Church, Clopton Alumni Association or Pike County Home Health and Hospice. Online condolences may be sent to www.collierfuneral.com

Marilyn Crow, 93, passed away at her home in Clarksville on March 21, 2015. She was born in Hannibal, Missouri on June 26, 1921 to Kenneth and Margaret Romberg Scott. She graduated from Hannibal High School and married Walter Crow in May 1938.... View Obituary & Service Information

The family of Marilyn Crow created this Life Tributes page to make it easy to share your memories.

Marilyn Crow, 93, passed away at her home in Clarksville on March...

Send flowers to the Crow family.