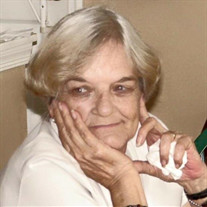 Mrs. Lois Virginia Starman, 80, of Louisiana, Missouri passed away Friday, June 12, 2015 at the St. Joseph Hospital West in Lake St. Louis, Missouri. Funeral services will be held at 1:00 P.M. Tuesday, June 16, 2015 at the Collier Funeral Home in Louisiana, Missouri. The Rev. Alvin Young assisted by the Rev. Bill Maupin will officiate. Visitation will be held from 10:00 A.M. until time of service at 1:00 P.M. at the funeral home Tuesday, June 16th. Burial will be in the Fairview Cemetery near Louisiana. She was born August 6, 1934 in Bowling Green, Missouri the daughter of Joseph and Ruby Beulah Walker Carr. She married John Leroy Starman October 25, 1952 at Pittsfield, Illinois and he preceded her in death November 15, 2007. Lois is survived by two sons; John Leroy Starman, Jr. of Louisiana, Missouri and Rob Starman (Toni) of Clarksville, Missouri, two daughters; Lois Sue Griffith (Warren Griffith, Jr.) of Battlefield, Missouri and Pamela Jo Stoddard (Randy) of Republic, Missouri, 18 grandchildren, 28 Gt. Grandchildren and several step-grandchildren. She was preceded in death by one son Ronald Wayne Starman who died May 27, 2014. She graduated from the Louisiana High School in 1952. She was a licensed Beautician and had owned and operated “Lois’s Beauty Nook” in Louisiana until her retirement. She was a member of the First Baptist Church in Louisiana. Lois was an avid sports enthusiast and loved to watch the “Cardinals Baseball Team and the Mizzou Basketball team play. Honorary pallbearers are; Steve Poyser and Ronnie Henry. Active pallbearers are; Bryan Oliver, Jeff Stoddard, Chris Stark, Allan Bolton, Brian Findley and Dan Page. Memorials may be given to the First Baptist Church Stained Glass Fund or to Pike County Home Health and Hospice.

The family of Lois Virginia Starman created this Life Tributes page to make it easy to share your memories.

Send flowers to the Starman family.