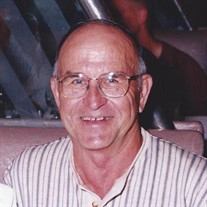 Mr. Lewis Earl Kent, 82, of Clarksville, Missouri passed away Thursday, April 16, 2015 at 9:50 p.m. at the DePaul Medical Center in St. Louis, Missouri. A Celebration of Life ceremony will be held at 11:00 a.m. at the Ramsey Creek Baptist Church near Clarksville, Missouri Monday, April 20, 2015. The Rev. John Bateman assisted by The Rev. Robert Smith will officiate. Visitation will be held from 3 to 7 p.m. Sunday, April 19th at the Collier Funeral Home in Louisiana, Missouri. Burial will be in the Greenwood Cemetery in Clarksville, Missouri. He was born January 6, 1933 in Clarksville, Missouri the son of Earl and Alley Tadlock Kent. He married Verna Jean Carlton on March 25, 1951 at the Clarksville, Methodist Church in Clarksville, Missouri. He lived his early life in Elsberry, Missouri moving back to Clarksville in 1945. He is survived by his wife, Verna Kent of the home, one son, Keith Allen Kent (Lisa) of Hannibal, Missouri, one daughter, Mary Christine Sisco (Doug) of Paynesville, Missouri, 4 grandchildren; Cale Kent , Shayla Kent, Matthew Taylor and Nicole Silva, 2 step-grandchildren, Brock Sisco and Kelsey Allen, 4 great-grandchildren; Dean and Romy Taylor of the State of California and Taylor and Ashlyn Silva of Denver, Colorado, one brother, Elsworth Kent (Nell) of Mobile, Alabama, 2 sister-in-laws, Virginia Wornica of Fenton, Missouri and Deanna Smith (Bob) of Cedar Falls, Iowa, cousins, nieces and nephews. He was preceded in death by his parents, Earl and Alley Tadlock Kent, Step-father, Elmer Talbert, one brother, Willis Lee Kent, Foster brother, Lloyd Taylor and one grandson, Kyelar Aston Kent. Lewis graduated from the Clarksville Public Schools as valedictorian 1n 1950. He was then employed on the River boats until 1952. He was a veteran serving with the United States Army Signal Corp during the Korean Conflict from 1953 until he was discharged in 1955. In 1963 he and his wife moved to Helena, Montana where he operated a Service Station for a short time and also worked for the Highway Dept. and as a Postal Carrier for a few years. They returned to Clarksville where he worked as a Lockmaster for the Corp of Engineers at Lock & Dam 24 at Clarksville from June 1968 until his retirement in 1992. In his spare time he enjoyed doing Carpentry work and building houses. In his early life he loved to fish, hunt, trap and spend time on the Mississippi River. He also loved Bowling, Traveling, meeting people and pitching Horseshoes, winning 1st place in State and World Tournaments in his class. He had been very active in the community working with the Boy Scouts, serving on the Fire Department, City Council and the Board of Alderman. He was Baptized at the Ramsey Creek Baptist Church in 1982 and had been very active in the church. Honorary pallbearers are; Elsworth Kent, Thomas Hooton, Charles Henley, Randy Lovell, Don Mirick, Alton Jenkins and Gene Roethlisberger. Active pallbearers are; Keith Kent, Cale Kent, Douglas Sisco, Daniel Silva, Matthew Taylor and Brock Sisco. Memorials may be given to the Greenwood Cemetery Association in care of Collier Funeral Homes, Inc., 117 Barnard Dr., Louisiana, M0 63353

Mr. Lewis Earl Kent, 82, of Clarksville, Missouri passed away Thursday, April 16, 2015 at 9:50 p.m. at the DePaul Medical Center in St. Louis, Missouri. A Celebration of Life ceremony will be held at 11:00 a.m. at the Ramsey Creek Baptist Church... View Obituary & Service Information

The family of Lewis E. Kent created this Life Tributes page to make it easy to share your memories.

Send flowers to the Kent family.