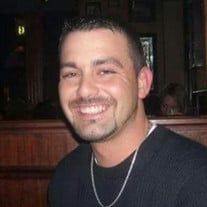 Mr. Kurtis Taylor, 35, of Louisiana, MO, passed away on Saturday, February 18, 2017 near Clarksville, MO. A Mass of the Christian Burial will be held at 11:00 A.M. Thursday, February 23, 2017 at the St. Clement Catholic Church in St. Clement, MO. Father Bill Peckman officiating assisted by Rev. Terry Cook. Burial will be at the Mt. Lebanon Cemetery in St. Ann, MO. Visitation will be held from 4:00 P.M. until 7:00 P.M. on Wednesday, February 22nd at the Collier Funeral Home in Louisiana, MO. He was born on March 2, 1981 in St. Louis, MO. He was married to Brittany Painter on May 3, 2014 in Louisiana, MO and she survives. He is also survived by 3 sons, Hunter Taylor, Braden Taylor, and Cameron Taylor all of the home, His parents, Mary and David Matthews and the late Michael Taylor, his brothers, Brandon Taylor, whom he was very close with, Michael Taylor, and Garrett Matthews, and his sisters, Madison Matthews, Meredith Matthews, and Michelle Taylor, his maternal grandmother, Denise “Marmie” Wurdack, his paternal grandparents, Rich and Linda Hagan “Mema and Papa”, his parents in-law, Ernie and Lee Ann Painter of Louisiana, MO, brother in-law, Nathan Painter (Ashley), sister in-law, Megan Kniess (Zach), and many aunts, uncles, nieces, nephews, and cousins. He was preceded in death by his father, Michael Taylor, his maternal grandfather, Clarence Peat, and paternal grandfather, Michael Lee Taylor, Sr. Kurtis had grown up in St. Louis, MO and had graduated from Marquette High School in 1999 and also had attended classes at University of Missouri St. Louis. He was a veteran serving with the US Army. He was a Manager for Chili’s Restaurants and had worked at several of their locations in the St. Louis area. He and his wife Brittany met at their Chesterfield location while he was working there. He most recently was working as a Salesman for Jim Trenary Chevrolet-Buick in Troy, MO. He was a lifelong fan of baseball and enjoyed watching and following the St. Louis Cardinals very much, and loved to go fishing. He loved his family and will be greatly missed. Honorary pallbearers will be Nick Bouras, Robert Klick, Patrick Klick, Jamie Becker, Gabe Becker, and Dave Matthews. Active pallbearers will be Gary Gerhardt Jr., Jason Lang, Josh Sontag, Vinny Pavia, Frank Pendino, Matthew Klick, Gary Klick, Brandon Taylor, and Mike Taylor. In lieu of flowers, memorials may be given to a Trust Fund for his children, Hunter, Braden, and Cameron, in care of Collier Funeral Homes, Inc., 117 Barnard Drive, Louisiana, MO 63353.

The family of Kurtis Taylor created this Life Tributes page to make it easy to share your memories.

Send flowers to the Taylor family.