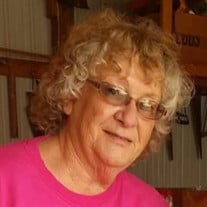 Mrs. Karen Kay Tarrants Henderson, 76, of Pleasant Hill. IL, passed away on Wednesday, October 28, 2020 at the University of MO Hospital in Columbia, MO. Funeral services will be held at 11:00 A.M. on Tuesday, November 3, 2020 at the Collier Funeral Home in Louisiana, MO. The Rev. Don Hannel will officiate. Burial will be at the Greenwood Cemetery in Clarksville, MO. Visitation will be from 4:00 P.M. until 8:00 P.M. on Monday, November 2nd at the funeral home. Karen was born on July 31, 1944 in Louisiana, MO to Albert B. Tarrants and Lucille Lynn Tarrants. She was married to James Robert “Bob” Henderson on July 28, 1962 at the First Christian Church in Louisiana, MO. She is survived by 2 sons, David Henderson (Cathy), and Robert “Shane” Henderson (Taylor Preston), a daughter, Rita Hollocher (Kenny), grandchildren, Jamie Henderson (Charlotte), Derrick Henderson (Sara Eimer), Ashley Hollocher (Nate Cecil), Vince Hollocher, Aaron Hollocher, Dylan Henderson (Jasmine McCullough), and Maddy Henderson (Mac Baladenski), great grandchildren, Jasen Henderson, Janessa Henderson, and Abraham Cecil, as well as nieces, nephews, other extended family, and friends. She was preceded in death by her parents, her husband, a brother, Jack Tarrants, a step-brother, Charles Fischer, 3 sisters, Peggy Sitzes, Pat Greenwood, and an infant sister, and 2 granddaughters, Chasity Henderson and Melissa Henderson. Karen grew up on 5th street in Louisiana and graduated from Louisiana High School with the Class of 1962. After high school, she married and moved to Pleasant Hill where she raised her family. She worked at Walmart in Louisiana and Stark Bros. until retiring. After retirement, she spent the winter months camping in southern Texas. They enjoyed driving and camping across Canada and Alaska and had made it all the way to the arctic circle. She enjoyed camping and spending time with her grandchildren. She was a member and deacon of the First Christian Church in Louisiana, MO. She lost the love of her life on Oct. 1, 2020 when Bob preceded her in death. Bob and Karen had 58 wonderful years together. They are greatly loved and both will be missed. Memorials may be made to the Louisiana Alumni and Friends Association in care of the funeral home.

Mrs. Karen Kay Tarrants Henderson, 76, of Pleasant Hill. IL, passed away on Wednesday, October 28, 2020 at the University of MO Hospital in Columbia, MO. Funeral services will be held at 11:00 A.M. on Tuesday, November 3, 2020 at the Collier... View Obituary & Service Information

The family of Karen Kay Henderson created this Life Tributes page to make it easy to share your memories.

Send flowers to the Henderson family.