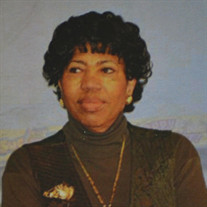 Joyce Luella Rudd, 70, of Jennings, Missouri passed away January 26, 20-16 at Barnes Jewish Hospital in St. Louis, Missouri. Joyce was born on December 26, 1945 near Eolia, Missouri, the daughter of Charles and Anna Rudd. Funeral services will be held at 11:00 a.m. Saturday, January 30, 2016 at the Collier Funeral Home in Louisiana, Missouri with Elder Richard Smith officiating. Visitation will be held from 10:00 a.m. until time of service at 11:00 a.m. on Saturday, January 30th at Collier Funeral Home in Louisiana. Burial will be in the Mt. Ayre Cemetery, Edgewood, Missouri. Survivors include her mother, Anna N. Rudd of Jennings, Missouri, one brother, Charles W. Rudd, Jr. of St. Louis, Missouri, five sisters; Annette Tucker (Henry) of Centralia, Missouri, Rosemary Nailon (Bob) of Alta Dena, California, Kathleen Alexander of Grand Rapids, Michigan, Susie Smith of Kansas City, Missouri, Loretta Dedmon of Bedford, Texas, a host of nieces and nephews, and many friends both near and far. She was preceded in death by her father; Charles W. Rudd, Sr., one sister, Marjorie Rudd Bryant and a brother, Frederick Rudd. Joyce’s educational journey began at Carver School in Eolia, Missouri. Even before the ruling in Brown v. the Board of Education, the schools in Eolia consolidated. She was a member of one of the first integrated classes in the area. She and her fellow classmates remained a close knit group from that day until the present. She graduated from Clopton High School with the Class of 1964. After graduation she worked a number of jobs in Bowling Green, Clarksville and Troy, Missouri in the garment industry before working in Washington, D.C. for the Federal Government. During her 40 plus years with the federal agency, she performed her duties effectively. She remained friends with many of her co-workers throughout the years. Joyce’s love of the Lord began at an early age. She accepted Christ as her Savior and became a member of Mt. Ayre Baptist Church where she sang in the Choir and served where needed. West Florissant Baptist Church, New Jamestown Baptist Church and Bellefontaine Baptist Church have all benefited from her passion to share God’s love with children and adults. Many of her Sunday School students enjoyed the lessons “Miss Joyce” taught. She had been instrumental in keeping the Mt. Ayre (Old Knob) Annual Basket Dinner going for over 20 years. Although attendance dwindled, she persisted in continuing the traditions and heritage that was begun decades before she was born. Joyce loved playing the guitar, singing and crocheting which occupied much of her spare time. Her finished products have warmed many an adult, comforted our country’s military men and women, and won prizes at the annual Strawberry Festival which benefits the Baptist Children’s Homes. Her special baby blankets with bumpies were highly treasured by those who received them.

The family of Joyce Luella Rudd created this Life Tributes page to make it easy to share your memories.

Send flowers to the Rudd family.