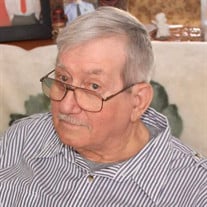 Mr. John R. Whitaker, 82, of Louisiana, MO, passed away on October 21, 2020 at his home in Louisiana, MO. Funeral services will be held at 1:00 P.M. on Monday, October 26, 2020 at the Collier Funeral Home in Louisiana, MO. The Rev. Cole Branstetter officiating. Burial will be at the Riverview Cemetery in Louisiana, MO. Visitation will be held from 11:00 A.M. until time of service Monday at the funeral home. John was born on March 30, 1938 in Ralls County, MO to Richard Whitaker and Mildred Carr Whitaker. He was married to Jo Anne Dryden on October 4, 1968 in Louisiana, MO. He is survived by his wife, Jo Anne Whitaker of the home, 3 sons, LaDon Whitaker (Jennifer) of Booneville, MO, Scott Whitaker of Clarksville, MO, and Mike Whitaker (Susan) of Louisiana, MO, 7 grandchildren, Tyler Whitaker, Lucas Whitaker, Kelsey Whitaker, Ally Hisle, Jefflyn Brown, Dustin Brown, and Brandon Brown, 6 great grandchildren, Bryson Brown, Karson Brown, Landon Brown, Ella Brown, Caliber Schindler, and Madison Pearson, a brother, James Whitaker of Hannibal, MO, very Close friends, Tracey Ray, Jonathan Schindler, and Jerry Green, and numerous nieces and nephews. He was preceded in death by his parents, a son, Johnny Ray Whitaker, an infant daughter, Ladana Whitaker, a brother, Donald Whitaker, and an infant sister, Susan Whitaker. John was a graduate of high school in New London, MO. He was employed over the years as an officer with the Louisiana Police Department and a deputy with Pike County Sheriff’s Department. He also worked at Louisiana Plastics and Stark Bros. in Louisiana until his retirement in 2000. He was an avid hunter and fisherman. He loved having cookouts and spending time with his family, and watching old westerns. Memorials may be made to the Kidney Foundation, the American Heart Association, or donor’s choice in care of the funeral home.

The family of John R. Whitaker created this Life Tributes page to make it easy to share your memories.

Send flowers to the Whitaker family.