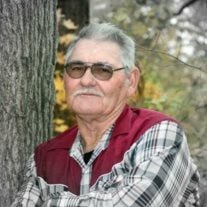 Mr. John Russell Surgeon, 69, of Louisiana, Missouri entered into eternal peace on Tuesday, March 18, 2014 at 2:40 p. m. John was born on March 22, 1944 at Nebo, Illinois, a son of and preceded in death by his Mother, Mary Weeks of Elsberry, Missouri and Father, Henry Shaw of Hardin, Illinois. Also preceded in death his adoptive parents James R. Surgeon and Aleta M. Surgeon of Nebo, Illinois, two sisters, Jean Shaw of Elsberry, Missouri and Mary Belle Seehausen of Fieldon, IL and one brother, Albert A. Shaw of Elsberry, M0 and one son, Matthew Wayne Surgeon of Quincy, IL. He leaves his loving memories to be cherished by his wife of (37) years, Barbara G. Surgeon of Louisiana, Missouri, his daughter, Robin Green and husband Eric of Hannibal, Missouri, his son, Melvin Stanger Sr. and wife, Denise of Troy, Missouri, his son Gene Stanger and wife Eilene of St. Charles, Missouri, his daughter, Angela Butler and husband Mike of Clarksville, Missouri and son, George W. Surgeon of Quincy, Illinois and his sister, Dora Sapp of Bowling Green, Missouri, 13 grandchildren, 6 great grandchildren and numerous nieces and nephews. He had a life- long love of the Mississippi River, the catfish to be exact. Whenever there was an opportunity to enjoy a moment of fishing on the mighty Mississippi or other home of the catfish he would grab it. He also excelled in the sports of Bowling, Horseshoes and hunting. Most of all he loved spending time with his family. Funeral services will be held at 2:00 p. m. Saturday, March 22, 2014 at the Collier Funeral Home in Louisiana, Missouri. The Rev. Ron Kunzweiler will officiate. Visitation will be held from 10:00 a. m. Saturday, March 22nd until time of services at 2:00 p. m. Burial will be in the Riverview Cemetery in Louisiana, Missouri. Honorary pallbearers are; Mike Staggs, Daniel Elliott, Randy Malcomb and Buddy Sapp. Active pallbearers are; Robert Sapp, Roger Edwards, Robby Edwards, Gary Mc Christian, Chris Robertson and Myles Neff. Memorials may be given to the Hope Lodge, 4215 Lindell Blvd., St. Louis, Missouri

Mr. John Russell Surgeon, 69, of Louisiana, Missouri entered into eternal peace on Tuesday, March 18, 2014 at 2:40 p. m. John was born on March 22, 1944 at Nebo, Illinois, a son of and preceded in death by his Mother, Mary Weeks of Elsberry,... View Obituary & Service Information

The family of John Russell Surgeon created this Life Tributes page to make it easy to share your memories.

Send flowers to the Surgeon family.