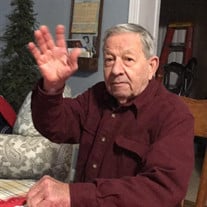 John Alex Shade passed away March 14, 2022 at the age of 83. John was born Feb. 24, 1939, son of the late George and Ruby Shade of Louisiana MO. John graduated Louisiana high school in 1957. After graduation, John joined the Army Reserves for 2 years. He married Carol Louise Harrelson of Bowling Green, MO in 1959. Carol passed away in June of 2005 after 46 years of marriage. They had 2 sons, Mark Shade (Linda) and Randy Shade (Stacy) and grandchildren, Matthew Shade, Heather Shade, Dane Shade, Tyler Shade, Isaac Shade, and great-grandchildren, Renee Shade, Kash Shade, and Matilyn Shade Miller. In his early years, John worked for Louisiana Plastics, Brown’s Foundry, and later hired by Missouri Edison Co. starting in Elsberry and later working in the Louisiana office. He took an early retirement when the company merged with Union Electric. John was then elected to serve as Pike Co Assessor in 1984 until his retirement in 2005. He was a member of the American Legion in Louisiana MO and very active in the Boy Scouts serving as scoutmaster. He was also a member of the Elks Lodge and served on the George Trimble Board for several years and in his later life enjoyed his time every day visiting with friends at the Trimble House. After retirement John loved spending time with his grandchildren, refinishing furniture and wood working projects, he also loved being around his many friends, and loved to sing karaoke. John is survived by his sons, his grandchildren, one sister, Georgiana (Joann) Martin, one brother and William (Bill) Shade (wife Sandy). John was preceded in death by his parents, his wife, Carol, his sisters, Norma Preston, Leona Butts, Martha Preston, and his brother, Donald Shade. A graveside service will be held at 11:00 A.M. Saturday, April 2nd at the Memorial Gardens Cemetery in Bowling Green, MO. Collier Funeral Home, Louisiana, MO is in charge of arrangements. In lieu of flowers, memorials may be made to the Alzheimer’s Association, Pike County Hospice, or Donor’s choice.

The family of John A. Shade created this Life Tributes page to make it easy to share your memories.

Send flowers to the Shade family.