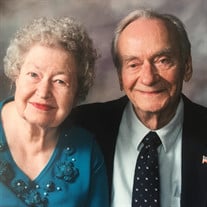 John W Middleton, MD went home to the Lord Sunday, July 21, 2019. A lifelong native of Pike County, he was born in Bowling Green, Mo August 19, 1925 to Jacob Hoard and Mary Jane (née Whiteside) Middleton. John attended Bowling Green High School and then Westminster College in Fulton, Mo. where he was a member of the Kappa Alpha Order Fraternity. When his Country called, he served two years with the US Fifth Army as a private in Italy until the war's end. Returning to Missouri, he attended Washington University, graduated from the University of Missouri School of Medicine (then only a two-year medical school) and received his Doctor of Medicine from Temple University in Philadelphia, Pa. on June 14, 1951, followed by an internship at Kansas City General Hospital. Notably, he did not graduate from high school or college, but earned enough credit hours to move forward from each, ultimately receiving his Medical Degree. Dr. John was married to his lifelong love, Mary Alice Jaeger of Clarksville, Mo on June 17, 1951 who preceded him in death in 2014. After a short time in Carthage Il, he returned to Louisiana where he established (with Dr Joe Martin, ...on only a handshake), the Pike County Medical Group. He practiced medicine in Pike County for over thirty years and delivered over 2000 babies (his favorite job!) After retirement, he served as a cruise ship physician, traveling around South America and Hawaii on the "Love Boat." He also served on the Pike County Hospital board and was a 50-year member of the Elks Lodge and the American Legion. Dr Middleton had a lifelong love for Pike County, living in the same house for over 60 years. His real passion though, was for boating on the Mississippi River. Over his 93 years, he owned numerous boats and navigated several cruises to Minneapolis and Kentucky Lake. Other interests included gardening, farming, globetrotting, and Dixieland Jazz. Dr Middleton is survived by his four children: John, Jr of Springfield, Mo (Peggy & daughters Amanda; husband Pablo Bravo, Katie; Husband Sean Davis and daughter Edith, & Patsy; Husband Carlos Arribas), Alice Jane Holtzhouser of Millstadt, Il (Jay & children Jason and Emily), Joe of Grain Valley, Mo (Diana & daughter Amanda) and Tom of Louisville, Ky (s/o Ann Mudd, sons Mackey & Jacob Price). Visitation will be held from 5-8pm Friday, July 26th at the Collier Funeral Home in Louisiana, MO. The Rev. Jay Ayers, assisted by Rev. Randall Cone, will officiate services at 2:00 P.M. Saturday, July 27 at the First Presbyterian Church, Louisiana, MO and joining his wife of 62 years in Bowling Green Cemetery. In lieu of flowers, please make donations to the First Presbyterian Church, Louisiana, MO. The Middleton family wishes to express our heartfelt thanks to Donita McKenna, Dr. Phil Pitney, and the Citizens of Pike County for their love and support in Dr John's later years.

The family of Dr. John William Middleton MD created this Life Tributes page to make it easy to share your memories.

Send flowers to the Middleton family.