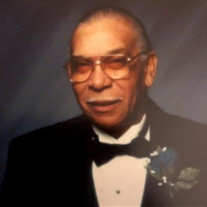 John Elmer Hughes was born March 10, 1929, in Paynesville, Missouri to the late Blanche Houston Hughes and John Baptist Hughes. After both of his parents passed, John, his bother Clyde, and two sisters, Gussie and Leota, were raised by his grandmother, Susiana Harris Houston and his grandfather “PaPa” Lorenzo Dove (Ranzel) Houston. John helped with the farm work and did labor work. John Elmer moved the family from Paynesville, Missouri to Springfield, Illinois ‘round 1953. He went to work for Allis Chalmers, later known as Fiat Allis, where he retired after more than 30 years of employment. After retirement, John thought he would give farming another chance. He returned to Paynesville, purchased land adjacent to the homestead, a mobile home and a couple of cows. After one of his cows was hit by a car, he decided the cattle part of living in the country was not for him. John eventually purchased the land where he grew up, and he put a new mobile home on the property. Every Memorial Day, all of the family would return to Paynesville for a weekend of fun, laughter, storytelling and fellowship. The land was filled cars, a motorhome, pop up camper and tents; long tables were lined with delicious foods. At these gatherings, not only did his children call him “Daddy,” but his grandchildren, great-grandchildren and great-great grandchildren all affectionately called him “Daddy”. His nieces and nephews all call him “Uncle John Elmer”. John was a member of Bethel African Methodist Episcopal Church in Paynesville, Missouri. John was preceded in death by his parents, one son, Steven Ray Hughes, two sisters, Gussie Bell Anderson and Leota Johnson, one brother, Lorenzo Clyde Hughes, and former wife, Julia Mae Hughes. John leaves to cherish his memory, four sons, John Jr. of Springfield, Ill., Dennis of Westminster, Colo., Dana (Bobbie) of Aurora, Colo., and Derek (Janice) of Chatham, Ill.; nine daughters, Mrs. Edna Lewis, Mrs. Clark (Virginia) Douglas, Mrs. Purnell (Jan) Borders, Mrs. Michael (Fayetta) Clemmons, and Mrs. Steve (Linda Kay) Barnwell, all of Springfield, Ill., Mrs. Carle (Blanche) Abernathy of Aurora, Colo., Mrs. Robert (Sandra) Hearn of Smyrna, Ga., Mrs. Tim (Wanda) Cruz of Decatur, Ill., and Mrs. Paul (Cynthia) Bowie of Clinton, Md.; 29 grandchildren, 45 great-grandchildren, and 6 great-great grandchildren; cousins, Alphonso Webb of Paynesville, Mo., and Mrs. Lee (Joyce) Chambers of Denver, Colo., and a host of nieces, nephews, cousins, neighbors and friends.

John Elmer Hughes was born March 10, 1929, in Paynesville, Missouri to the late Blanche Houston Hughes and John Baptist Hughes. After both of his parents passed, John, his bother Clyde, and two sisters, Gussie and Leota, were raised by his grandmother,... View Obituary & Service Information

The family of John E. Hughes Sr. created this Life Tributes page to make it easy to share your memories.

Send flowers to the Hughes family.